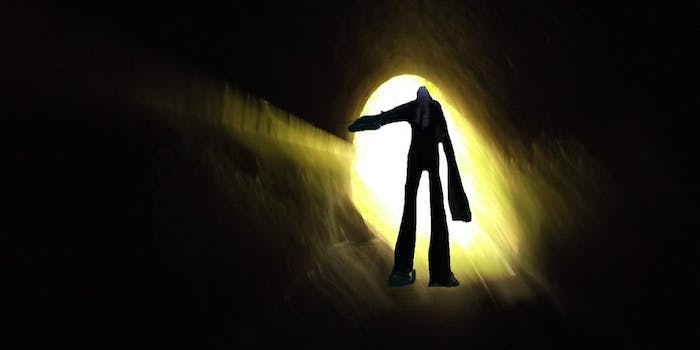 A new documentary uses the Slender Man stabbing to investigate how the Internet can affect children.

In May 2014, two 12-year-old girls lured their classmate into the woods and stabbed her 19 times because they believed if they killed their friend, the Slender Man would take them to his mansion in the woods.

According to the Slender Man myth, he’s a violent character that stalks and sometimes kills people. One of the Internet’s most notorious horror memes, the tall, faceless, suit-wearing creature has its roots in Creepypasta and other online forums.

The attempted murder is as prolific as the Slender Man himself, but the psychology behind the act, and the raw emotion and trauma the girls’ families experienced, is not quite as obvious.

Bill Weier, the father of Anissa Weier, one of the girls who committed the stabbing, emotionally and frankly discussed his family’s experience during a panel at the South by Southwest (SXSW) Interactive Conference this weekend.

The Slender Man stabbing is the crux of a new HBO documentary, Beware the Slender Man, which uses the case to investigate how the Internet can affect children’s behavior and how the spread of memes and online folklore can influence kids. The Weier family worked closely with the film to help tell the girls’ story.

In an emotional and somewhat intense panel, Weier discussed his family’s personal tragedy to a packed audience alongside Beware the Slender Man director and producer Irene Taylor Brodsky and psychology professor Jacqueline Woolley, who spoke about how online culture affects children.

1) Why the Weier family worked with HBO

The media harassed the girls’ families in the immediate aftermath of the incident; the story of an Internet meme inspiring two girls to attempt murder was a global phenomenon. The Weier family initially did not want to work with media, but after careful parental discussion, they decided standard media outlets would not be the best option and opted to cooperate with the longform production.

“How did we really want to portray our viewpoint as family members of one of the defendants?” Weier said. The family sought an outlet where “we would be able to tell our side of the story in a way that it would be given more time to be told, that could potentially expose what we saw or didn’t see considering Anissa and Morgan and the situation as a whole.”

After the stabbing, the school system blocked certain search terms pertaining to the case, including “Creepypasta” and “Slender Man.” They missed one big one though: Despite Anissa’s family trying to protect their youngest son from the news surrounding his sister’s crime, he found out everything he needed to know simply by searching her name at school, Weier said.

Despite being considered a horror character, Brodsky said she discovered all different kinds of representation through researching the film, especially in fanfiction that depicts him both as a murderer and a savior.

“I found most of the depictions of Slender Man as guardian angel to be in fanfiction, in written fiction,” she said. “Really developed narratives where he could on page 12 be disemboweling a child, and then on page 14, he’s truly caring for, and giving loving advice to, another child sitting on his lap. And there’s nothing sexually creepy about it; it’s just a totally dynamic personality that’s hard to wrap your head around if you’re looking at it on YouTube serials.”

In the film, Brodsky delves into Anissa’s Internet activity—everything from things she liked on social media to the psychopathy tests she took to determine whether she was a sociopath. Even though she had permission and information from Anissa’s parents and teachers, Brodsky said she still felt a bit guilty about trying to get inside Anissa’s mind through her Web browsing history.

As Brodsky learns through watching videos that Anissa liked, much like everyone else online, Anissa’s behavior and interests vary. She watched videos of cute kittens and rabbits, but she also had viewed videos about cats eating drowned mice and figuring out how to make Dum Dums into weapons and where humans have soft spots, Brodsky said.

But what does our Internet activity actually say about us as a person? Does it paint a holistic picture of who we are, or is the amalgamation of data based on closed tabs simply irrelevant content?

Weier went 230 days without being able to give his daughter a hug. She was transferred to a facility where she must remain behind glass and bars when talking with her family. Anissa does not have access to a properly trained doctor or counselor, despite asking for one to try to understand why she committed the crime.

And perhaps most shocking is that Anissa and Morgan Geyser will be tried as adults. (The Daily Dot normally does not name adolescents involved in a crime, but because the girls are being tried as adults, we are publishing their names.)

The trial has not happened yet, and they are now 14 years old. As they get older, the public perception might change, and it’s important for the jury to eventually draw a distinction between intelligence and maturity, Weier said.

“People are finally starting to sit up and taking notice, and say, ‘You know what, maybe we’re not as right as we thought we were.’ As tragic as it is, I think the film and this case are starting to open up a few eyes as to what the flaws in the legal system might be.”

Photo via badbarrykelly50/Flickr (CC BY ND 2.0)