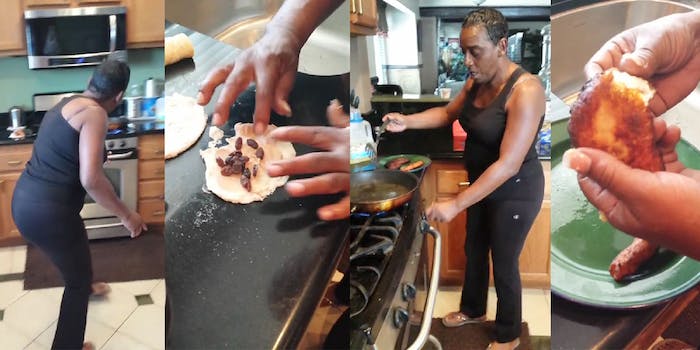 Someone give this woman a TV show, stat.

Aunt Fee (also knowns as Sister Fee) started uploading videos July 30 and has already made a splash, with 20,000 subscribers and over 700,000 views on her channel in two days. The reason? Her no-nonsense, irreverant, and realistic approach to cooking and completely eschewing the YouTube cooking establishment while still teaching her viewers a thing or two. Warning: She’s extremely NSFW.

Gone is the stationary kitchen shot favored by YouTubers and the TV cooking establishment alike. Gone are the glossy closeups of ingredients, gone are specific measurements. There’s no schedule to her uploads, or pleas to subscribe or like the conent. Fee doesn’t even shoot her videos horizontal. Followed around the kitchen by Tavis (her nephew) manning the camera, Fee narrates her preparation and makes up names for foods on the spot. She even explains with honesty that paprika is just for color and that it does nothing for the flavor on a baked chicken recipe. She’s quick to correct her nephew when he doesn’t get the shot she wants or isn’t close enough to the food, and she is definitely aware that people are watching and she’s gone “viral,” but isn’t changing her approach in any way.

We’re hoping Fee has a long and successful YouTube career. Her comments may be rife with haters making fun, but Fee doesn’t let that get to her. She’s a breath of fresh air to the YouTube cooking community.