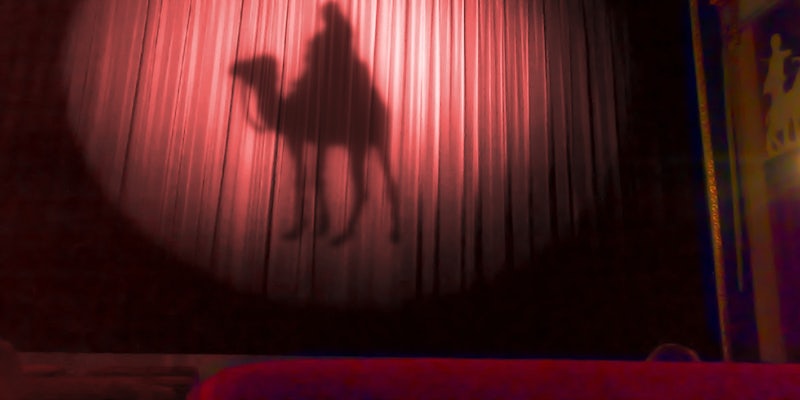 The seedy world of the Deep Web is bleeding into the realm of art.

U.K.-based playwright Alex Oates is staging a one-man show based on the story of Silk Road, the online black market for drugs and other contraband that was shut down last year by the FBI.

Just the thought of a dramatic recreation of an Internet community might bring an unwelcome shudder as memories of Hackers and The Net come rushing back—memories where “hacking” took the form of some sort of 3D Tron-esque computer game and the limits of the ‘Net’s future utility is the buying of pizza.

So there’s good reason to be skeptical of Oates’s Silk Road, right? Maybe not.

“It’s something that’s difficult to blag,” Oates tells the Daily Dot. “Those awful, cringe-inducing hacker tropes were prevalent because they were just tasking middle-aged screenwriters to try and do something ‘current’ without really getting to grips with the technology or interacting with the communities.”

Oates says that he, along with other young artists, actually understand how to translate the drama of the Internet world for the stage. For example, Oates mentions Enda Walsh’s Chatroom as the play “that made me realise it is possible to do tech on stage without having a bunch of people wiggling their fingers air-typing on imaginary keyboards.”

Oates’s Silk Road is inspired by interviews and interactions with anonymous users and vendors on Silk Road’s forums. It follows Bruce Blakemore, “a struggling young tech-head” from Newcastle in the United Kingdom, who, along with his grandmother, are drawn into an “Underworld Wide Web of new-age pirates and local gangsters.”

As a plot, it is not as far-fetched as it may sound. “These aren’t simply jejune junkies who just happen to know their way around a computer. Debate about international and national drug policy is in depth and well informed,” says Oates. “There are also a lot of discussions surrounding libertarian ideals and global economic and socio-political systems.

“The revolution may not be televised, but I’m wondering if it might be streamed.”

Oates is not the first to see the dramatic possibilities in the Silk Road takedown. Last October, 20th Century Fox licensed the rights to a Wired article by journalist Joshua Davis, which told the story of the site’s seizure by the FBI and the arrest of alleged Silk Road mastermind Ross William Ulbricht.

In Oates’s version, Silk Road is portrayed in a positive light in his play, he says, both as a technological acheivement and as a refutation of the worldwide War on Drugs.

“We explain the site and how it works in a down-to-earth and passionate fashion because, frankly, it is a pretty exciting development in technology,” he says. “People clinging to the concept of the War on Drugs may find it difficult that the play upholds it as a potentially safer and generally better alternative to street drug dealing.”

Not only is Silk Road one of the first theatrical productions to tackle the world of the Deep Web, it’s also one of the first—if not the first—to accept the Internet’s favorite form of payment: Bitcoin.

“I created a new account on Silk Road 2.0 forums telling them all about the play. One of the most well-established vendors sent me a private message saying that once they could ascertain that the play was for real they’d donate to our cause,” says Oates. “I launched the appeal for bitcoins on our website and immediately we received the donation.”

While Oates is accepting Bitcoin donations through the Silk Road website, the two bitcoins he received after chatting with a Silk Road vendor didn’t actually go toward the production itself.

“Because taking a play to Edinburgh is so expensive, and because so much of that cost has to be shouldered by the team and paid upfront, we sold them straight away to pay for the deposit on our flat for the month.

Silk Road premieres in August at the Edinburgh Festival Fringe, after a preview in London on July 27.