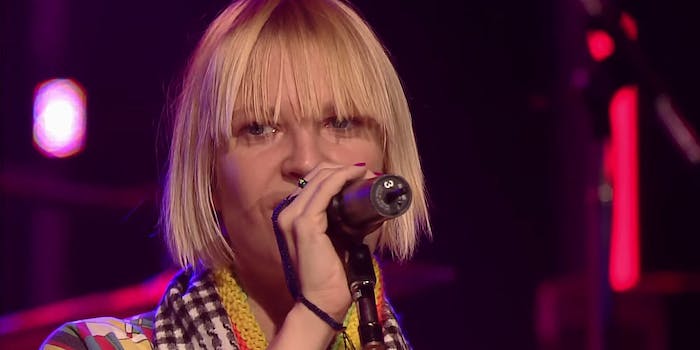 Warning: you see a butt.

Sia took matters into her own hands Monday night after learning that paparazzi were attempting to sell nude photos of her.

The eight-time Grammy nominee is notoriously private, usually obscuring herself behind big wigs and wild outfits in her music videos and live performances. In fact, up until recently, she’d rarely even revealed her face to fans—so it’s safe to say a full nude portrait probably wasn’t on her to-do list. Yet 15 grainy telephoto images of the singer’s unclothed backside were apparently being shopped around to potential buyers this week. The seller would tease the package with one watermarked photo and promise that once some money was sent their way they’d provide an unmarked version, plus 14 additional images.

The singer got her hands on the receipts, though, and decided to beat the sellers to the punch by releasing the image herself.

On Twitter late Monday evening, she wrote: “Someone is apparently trying to sell naked photos of me to my fans. Save your money, here it is for free.”

Someone is apparently trying to sell naked photos of me to my fans. Save your money, here it is for free. Everyday is Christmas! pic.twitter.com/aeQlnTwLuy

She also seized the opportunity to promote her forthcoming Christmas album, Everyday is Christmas, which hits shelves Nov. 17. It will reportedly feature 10 original holiday songs, including: “Underneath the Christmas Lights,” “Candy Cane Lane,” and “Puppies are Forever.”