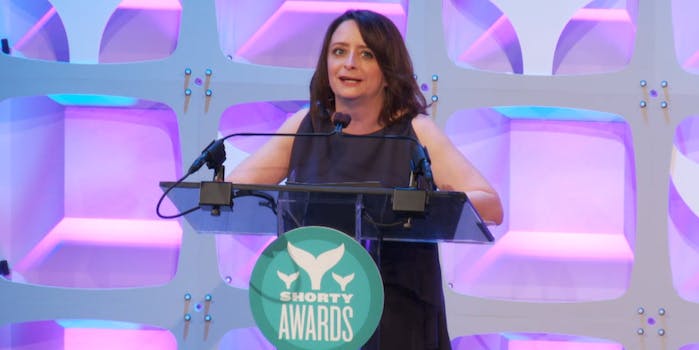 “It’s great to be amongst fellow narcissists,” Buress said, before calling his award “some cool shit to hold, hopefully when I’m in the club later.”

The ceremony was tightly executed and distractions kept to a minimum. Very little of the content actually being honored was even on display, a fact not lost on Buress: “Show some of the stuff… get a juggler or something.” He also called Twitter an avenue with which to “have sex with strangers in different cities.”

In a hotly contested duel, Bill Nye once-again bested his real-life friend Neil deGrasse Tyson, this time for social media’s best science. Nye took an on-stage selfie, told the room to “embrace the process of science,” and walked out to “Bill!” chants as the night’s most unanimous, exuberant people’s champ.

Hilton gave me two beds so my award now gets its own bed. 🏆📷😂 #Thanks #ShortyAwards pic.twitter.com/27OS4OLg4U

But the industry fluff was sobered by weighty awards, like Ebola warrior Katie Meyler‘s nod for social media’s best activist.

The night’s biggest awards honored the year’s breakout stars across social media. Smosh won as YouTube’s biggest star of the year. SourceFed was deemed the best show on the Web. Jenna Marbles as YouTube’s best comedian, and not, as she said in her acceptance video, the “most ratchet, hot mess.”

Shawn Mendes took home best Vine musician. C+C Mini Factory for Instagram user of the year. And perhaps in a fit of sign-of-the-times urgency, two directors were honored for vine of the year: Ian Padgham for The 9-Month Vine, and Maris Jones for Evolution of Sharing.

The ceremony found the 12-seconds necessary to play both award-winning films in their entirety.