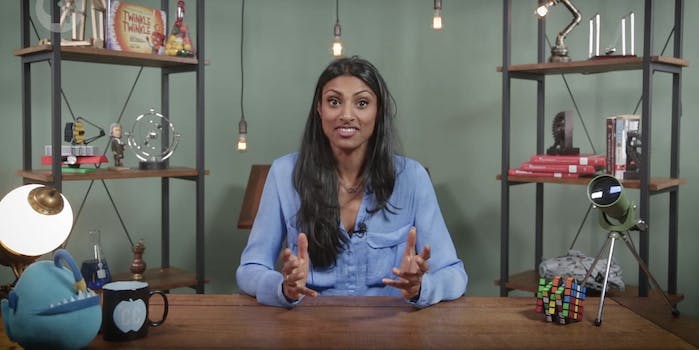 But for every woman in STEM, there is an equal and opposite reaction.

Against all odds, this new show is going to make you love physics.

After the Green brothers ended their much-beloved Crash Course Astronomy series in January, fans wondered what subject the duo would unveil next. With shows on government, literature, history, economics, philosophy, psychology, and more, the Crash Course curriculum now includes physics.

Crash Course Physics, now in its third week, is hosted by Dr. Shini Somara—a new face to many YouTube fans, but a veteran in the world of science education. Somara has been in love with science her whole life, and she graduated with her doctorate in mechanical engineering from London’s Brunel University at  just 24 years old. Since then, she has split her time between hosting science shows for television and working as a science and technology reporter for BBC World, BBC America, Sky, and Discovery.

In all of her work, Somara is passionate about making science accessible and fun for young viewers—a mission inspired by her dad. That unabashed love of learning makes her the perfect candidate to join the Crash Course family. And while Hank and John will always always hold a special place in fans’ heart, early commenters are clearly inspired seeing a female doctor hosting a show about physics. 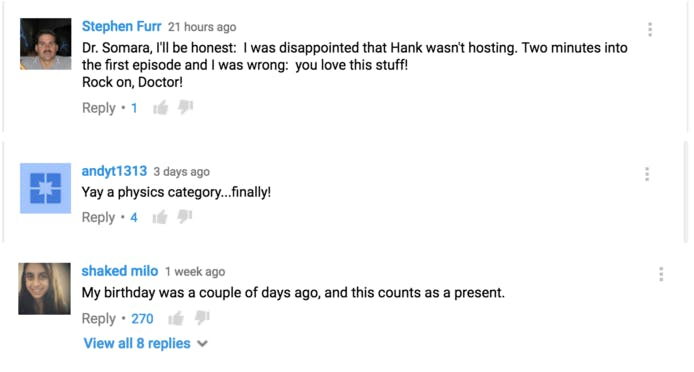 But inevitably, other commenters mansplained and shared sexist messages about Somara’s looks instead of her lessons. While it would be easy to turn a blind eye, women in STEM are choosing to do just the opposite. For creators like Emily Graslie and Vanessa Hill, sexism is something that needs to be fought against as a community, and that starts with people speaking up and staying passionate about STEM. By just being herself, Dr. Somara is breaking long-held gender-stereotypes around STEM, and her fans can’t get enough.