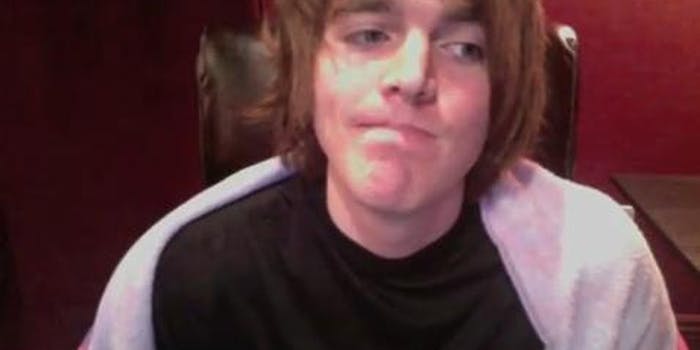 On YouTube, Shane Dawson breaks down over his break-up

The YouTube star received a tremendous amount of support after announcing his break-up in a personal video.

Most people look to family and friends for advice and comfort following a relationship break-up.

Twenty-three-year-old Shane Dawson, the fifth most subscribed to YouTuber with 2.8 million followers, turns to the Internet.

In a video posted on Nov. 29, the 2010 Teen Choice Award Web Star winner discusses the numbness he feels after breaking up with his girlfriend of a year and solicits advice on how to deal with it.

“So, this video I probably won’t even post, “ he begins, wearing a Hannah Montana blanket.

“It’s a video I’m probably going to regret making. But for my personal sake, I decided to record myself, right now.”

Titled “We Broke Up…,” the video is a surprising confessional from a comedian best known for his spoof videos. Thus far, the clip has collected 400,000 views and attracted 22,000 comments, along with dozens of video responses.

“Shane, there’s going to be a lot more break-ups,” Dawson tells himself at the end of his video. “You’re not that attractive, you cross-dress for a living, and you have a really weird belly button.”

Most of the 20,000 comments on Dawson’s video are extremely supportive: telling him it gets better, that they love him, and that there are hundreds of thousands of girls that would love to take his ex’s place.

swaggerofachampion74, who states she is 14 years old, told Dawson in her response video to not worry about his apparel habits, as some girls have a fetish for cross-dressing men. “You may not have one heart, but you have all of ours,” she says.

Michael Bathurst, 48, complimented Dawson in his response video for not going on the attack against his girlfriend, “which showed a lot of maturity for your age.”

Perhaps the video is a form of Millennial catharsis. Dawson is already public with his life, especially on YouTube, so for him to use the community as a virtual therapist couch is not that unusual.

Clearly YouTube fame, and transparency, has its perks. But it comes with a catch.

There are countless videos on his channel featuring his ex, which, unless he wants to stop getting paid for those views, Dawson can’t feasibly remove.

Either way, for his audience, his personal “ghost in the machine” moment makes for some engaging entertainment.