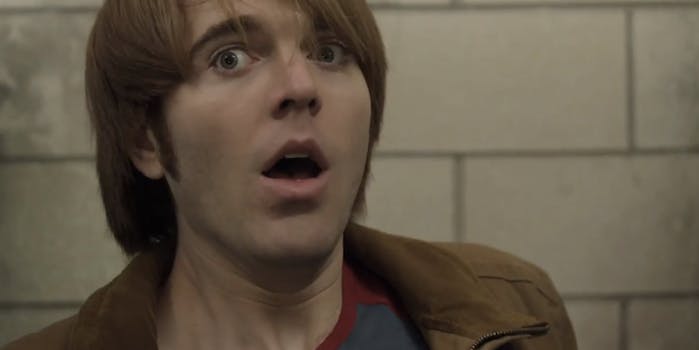 The YouTube comedian's feature film debut is closer than ever.

Shane Dawson addicts, rejoice! The YouTube comedian’s feature film debut is closer than ever, with a first trailer of his film Not Cool released over the holiday weekend.

Dawson’s stint at feature filmmaking is part of an as-of-yet-unaired Starz show The Chair in which he and another filmmaker were each given $900,000 and the same script and told to bring it to the screen. In addition to directing, Dawson also stars in the film as Scott, a high school graduate longing for the glory days of his youth during his first Thanksgiving home from college. His version of writer Dan Schoffer’s script looks to be right up the alley of his longtime fans, with his crass humor style and at least one instance of Dawson dressed up as a woman. However, the trailer also shows a character arc beyond what Dawson usually produces in short-form, and a lot more opportunity to showcase other talents and frequent collaborators like Lisa Schwartz. (Warning: Trailer contains some content that may be NSFW.)

Of course, it’s not often a trailer ends with a minute of excited vlogging from the creator, but that’s just Dawson’s style.

“I just want to thank you guys,” goes Dawson after the trailer finishes. “I know it sounds cheesy and lame, but I am so grateful and I love you so much. And because of you guys, I made a movie.”

The competition’s winner gets $250,000 determined by digital and ticket sales, making us feel a little bad for competitor Anna Martemucci and her film Hollidaysburg, as she has just over 1,600 Twitter followers to Dawson’s social media empire (12.1 million YouTube subscribers and 2.1 million Twitter followers).