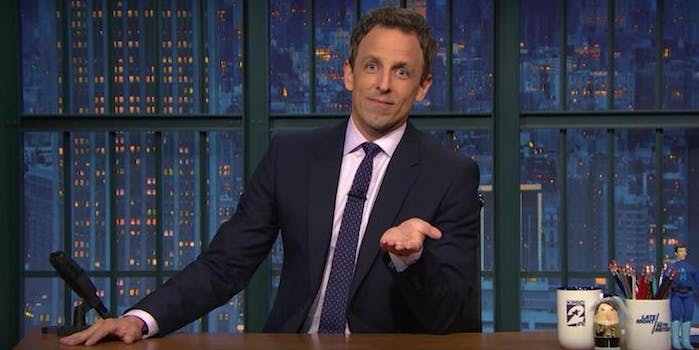 It's an offer he can't refuse.

The Seth Meyers–Donald Trump feud of 2016 is one of the more sillier spats to come out of late-night (and has origins dating back to 2011), but Meyers managed to raise the stakes even higher for the candidate who’s obsessed with his own image in his latest retort.

It all started earlier this week when Trump banned the Washington Post after he disapproved of its coverage, which he called “phony and dishonest.” That prompted Meyers to ban Trump from appearing on Late Night until he reinstated the Washington Post’s press credentials. Trump, who has since tweeted a Washington Post story he deemed “accurate,” responded by taking a dig at Meyers’s ratings, which are actually pretty decent; he consistently tops James Corden in the same time slot and has beaten Stephen Colbert in the key 18-49 demographic on occasion.

“He has begged me to do the show for the last two years. I have told him emphatically ‘no,’” Trump said. “I only like doing shows with good ratings, which as everybody knows, I only make better (by a lot).”

After briefly reconsidering, Meyers reaffirmed that Trump was still banned but he came with a counter offer. He’s heard the conspiracy theories that Trump doesn’t want to actually be president—he just wanted the publicity that came along with it—and offers Trump a way out: End your campaign by the Republican National Convention and you’ll get an NBC show where you’ll get to play the president. It allows people to see what Trump would actually do without any real-world consequences. (Of course, NBC is not OK with this very fake offer.)

Even if it does have to be called Chicago President, it might be tempting.