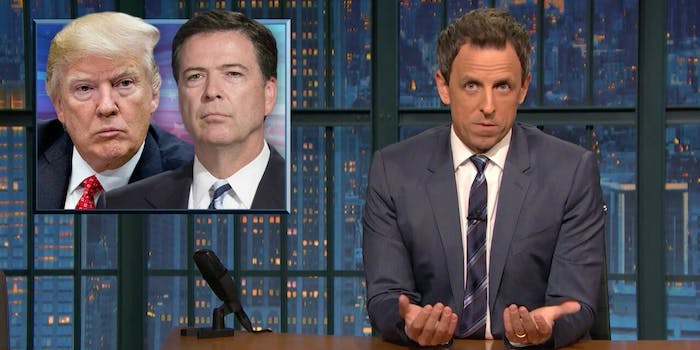 Seth Meyers breaks down the fallout after Comey firing

Updates are happening so fast journalists are running out of breath to report them.

After President Donald Trump fired FBI Director James Comey, the subsequent fallout continues to grow. To try and make sense of it, Seth Meyers broke down everything that had happened in the last 24 hours.

He said the firing of Comey—a line some thought Trump would never cross—“felt like something out of a dictatorship,” and although Meyers acknowledged that Trump had legal authority, the timing was particularly suspicious. Pushback from the White House hasn’t eased concerns that Trump fired Comey because Comey wouldn’t drop the FBI’s Russia investigation.

New updates are constantly coming out almost as fast as journalists can (literally) run to report them, none of which are making Trump’s actions look any more justified. And calls for an independent investigation grow, something Republicans have yet to do.

“Will they stand up and defend democratic institutions under threat from Trump?” Meyers asked. “Or will they continue to choose party over country?”