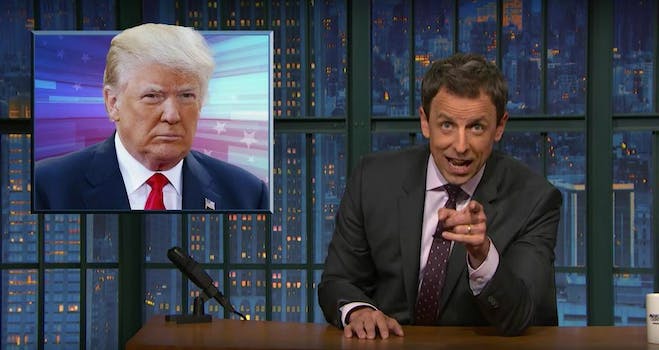 'He wasn't coming on anyway, let's be honest.'

Donald Trump has been testing the patience of his critics for months now, and for some his speeches on the aftermath of the Orlando shooting have been the final straw. President Obama took him to task in a televised speech—and now a late-night host has banned him altogether.

In one of his staple “A Closer Look” segments, Seth Meyers continued to attack Trump for exploiting the deadliest mass shooting in American history in order to push bigotry, trying to bar an entire religion from immigrating to the U.S., and implying that Obama sympathizes with terrorists. Even the act of reporting Trump’s remarks verbatim has gotten the Washington Post banned from his events for being “phony and dishonest.”

But Meyers and Late Night believe in freedom of the press, and they’re standing in solidarity with the Washington Post.

“So as long as the Washington Post is banned from Donald Trump’s campaign, Donald Trump will be banned from ever coming on this show,” Meyers said. “You missed out, buddy.”

Along with Samantha Bee and John Oliver, Meyers is one of the more consistent late-night hosts to rail on Trump beyond the joke. Meyers in particular has been doing it since the 2011 White House correspondents’ dinner. As such Trump has never been on Late Night and he was almost surely never coming, a point that Meyers admits just seconds later.

Banning Trump from Late Night is ultimately an empty threat. Meyers knows it, we know it, and if Trump ever learns about it, he’ll probably make a point about the show’s ratings on Twitter. But for Meyers, the ban probably felt pretty good.