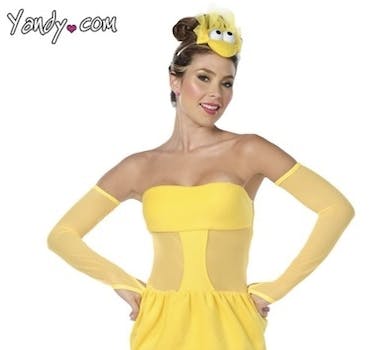 If the FuckNoSexistHalloweenCostumes Tumblr has taught us anything, it’s that there’s a plethora of naughty Sesame Street apparel available from costumer Yandy.com.

Those sexed-up versions of beloved childhood characters won’t be around for long, however, if Sesame Street has anything to say about it. Sesame Street Workshop’s Sarah Beth Erb told Buzzfeed the company has already taken action against the costumes.

“Our legal team has sent a cease and desist letter to the website selling them, will monitor the site, and follow up accordingly to make sure the items in question are removed,” she said.

Ever since Republican presidential nominee Mitt Romney shared his threat to defund PBS during the Oct. 4 debate, Sesame Street and especially Big Bird, whom Romney mentioned by name, have held particular political gravity.

With Halloween coming up, more than one news outlet has guessed Big Bird will be an especially popular costume this year, a prediction which explains Sesame Street’s swift action toward Yandy’s sexy costumes.

Ever since the cease and desist took effect, however, it’s Yandy that appears to be having the last laugh. The costume merchandiser is now selling Sesame Street’s sanctioned alternative—a less revealing Big Bird costume for the ladies—under the same “Sexy Big Bird” title. “Learning the ABC’s has never been this sexy,” claims the costume description.

Some other character costumes, like Elmo, have also been replaced with officially-licensed versions. However, Yandy’s Sexy Cookie Monster is still as scandalous as ever.