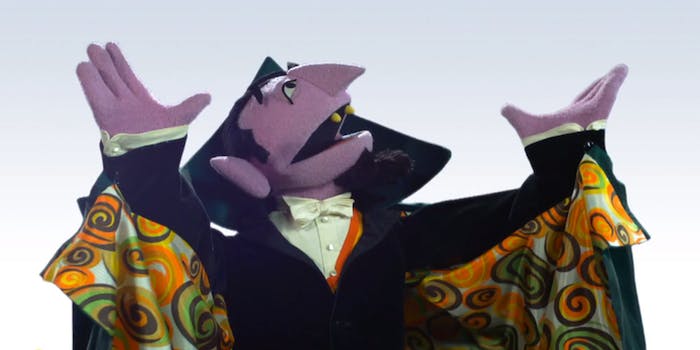 Did you guess it was going to star Count von Count?

How do you like those numbers, Count Von Count?

The show hit the milestone just a few weeks after launching a campaign that bribed us with a super secret video to be released after the billionth view.

As promised, Sesame Street released the much-anticipated video on Wednesday—it features the beloved Count doing what he does best: counting all the “You”s in YouTube.

It’s not a straight-up count (like ones on his Twitter account) but he breaks out into song about counting the one billion views after debating “whether to count ninja kitties or bites from Charlie.”

Along with the video, the Count wrote a 515-word guest post (he counted) on the official YouTube blog to pay tribute to one of his favorite numbers: zero (which may be surprising for someone who loves to count, but the Count addresses the oddity head-on).

“Well, for one thing, zero comes in very handy when there is nothing around to count about,” he noted. “For you can count zero of that thing. Like right now, as I look around the castle, I count zero elephants, zero airplanes, and zero Justin Bieber CDs. Wonderful.”

He goes on to explain that zero is a particularly important number. By adding zeros to a number there are even more things to count, and with nine zero’s you end up at one billion, which just makes counting a billion times more fun, according to the Count.

This milestone for Sesame Street is just the latest sign of a growing trend of education on YouTube in and out of the classroom. With the help of YouTube, educational videos are no longer restricted to what you catch on TV or access at your local library.

And Sesame Street has reached out to its target audience of kids, as well as adults nostalgic for their childhood. Along with classic sketches like “Elmo’s Song” and “C is for Cookie,” they’ve produced parodies like “Upside Downton Abbey” and “Share It Maybe.”

“[H]igh-quality, entertaining, and informative content is available on demand wherever there’s an Internet connection,” Caitlin Hendrickson, YouTubeEDU strategic partnership manager, told Mashable. “As a result, education is one of the fastest-growing content categories on YouTube and Sesame Street is at the forefront of this growth. Reaching 1 billion channel views is proof of their outstanding leadership in this space and their creative use of YouTube.”

Congratulations, Sesame Street! Here’s to counting to one billion more.