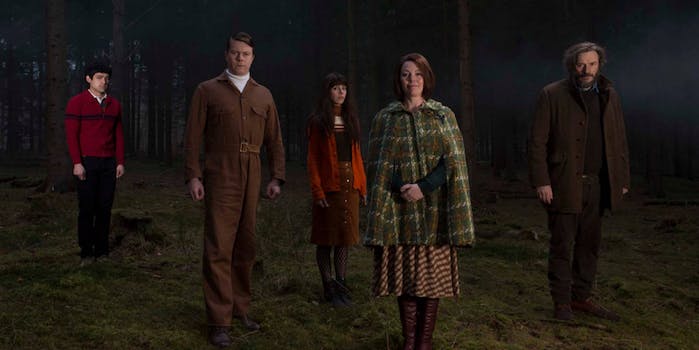 The fantastical, disturbing world of ‘Flowers’

In the first episode, Flowers gets right to it: A man attempts to hang himself from a tree but fails, as his daughter watches from her window. Later, he must face down the same rope after his mother falls and dies trying to store it.

These are the kinds of absurd scenarios that power Flowers, which debuts on comedy streaming site Seeso today. Originally a Channel 4 show, the six-episode Flowers—created, directed, and written by 29-year-old Will Sharpe—tells the story of Maurice Flowers, played by Julian Barratt (The Mighty Boosh, A Field in England) and wife Deborah (Olivia Colman of Peep Show and Broadchurch). Colorfully clad Deborah tries to slog through their marriage by being overly cheerful and accommodating, and Maurice is lost in a fog of suicidal thoughts and writer’s block, as he attempts to finish a children’s book.

Maurice is responsible for an animated creature called Mr. Grubb, and as the series progresses, the line between the two blurs. In the first episode, Maurice narrates the opening scene, which opens on a dreary English farm, with an ominous fairy-tale cadence: “From a weird reverie of dark revelation, Mr. Grubb woke up with a strange sensation.”

Elsewhere, Maurice and Deborah attempt to navigate the lives of their emotionally stunted twins, Amy (Sophia DiMartino) and Donald (Daniel Rigby of Black Mirror), who both long for Abigail, the daughter of a lecherous plastic surgeon. Abigail rejects Donald’s clumsy, angry flirting in favor of Amy’s trembling curiosity. “Are you a feminist?” she asks Amy, by way of a come-on.

And then there’s Shun (played by Sharpe), a Japanese-British artist who lives in a shed on the property and is there to help with illustrations for Maurice’s book. Instead, he develops an odd relationship with Maurice, presenting him with an increasingly sexual series of anime drawings. Sharpe says that his character actually grew out of sketch shows he watched as a kid living in Japan.

As the show unfolds, we see more of the connections between the family, in the face of chaos and depression.

We see how those two cultures shaped his life in the final episode’s heartbreaking opening scene.

Sharpe, who created the half-hour series for the U.K.’s Channel 4, says he spent a couple years fleshing out what the “world” of Flowers would look and feel like, and that Barratt and Colman were always first choice for the roles. Both actors have deftly balanced comedy with drama in their careers, but Sharpe relates that he never wanted the show to be “willfully dark.”

“We never wanted to make fun of anyone’s pain,” he says. “We also wanted the comedy to come from the sort of unfortunate nature of the situation. And I think that’s something the actors really took to heart, as well. They’re all taking their states of mind very seriously, but still trying to be funny. And I suppose that might be especially true of Julian, where he’s being funny but never, ever ignoring his character’s state of mind.”

The camera often lingers on Barratt’s face, which presents a worn map of frustration, confusion, and vulnerability. And by extension, it mirrors the vulnerability of his family, as they struggle to come to terms with infidelity, sexuality, and mental illness. This isn’t a show that might necessarily fit on Netflix—future home to another Channel 4 hit, Black Mirror—or Hulu, and it does seem a bit out of place on Seeso, which has pushed original series from mostly Los Angeles and New York-based comedians. But with its debut in January, Seeso offered several classic off-center British shows like Nathan Barley (which also stars Barratt) and Garth Marenghi’s Dark Place with subscription, bringing more obscure titles to a U.S. audience.

Sharpe relates that Seeso got involved between shooting the pilot and the series, and its inclusion expands Seeso’s roster beyond improv-based series or single-serving standup specials. It also feels like one of the more fully realized series on the platform, in terms of story and tone. As the show unfolds, we see more of the connections between the family, in the face of chaos and depression, though it does get a little heavy. Six episodes feel like 12, and though the series is expertly cast, conversations often get lost among the dusty bookshelves and cluttered, claustrophobic rooms.

But if you’re patient, you’ll be able to pull the curtain back on humanity, and let a little light in.