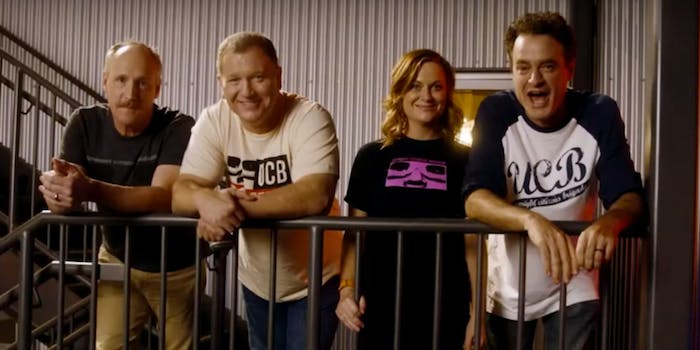 What to watch on Seeso, NBC’s new streaming comedy site

Seeso, the new streaming comedy site from NBCUniversal, debuted in its beta stage Thursday, and for the next month, comedy fans can test it out for free.

Come January, for a $3.99 fee, subscribers can catch new original series from Dan Harmon (HarmonQuest) and Amy Poehler (The UCB Show). Subscribers will also be able to stream Saturday Night Live, 30 Rock, Parks and Recreation, the U.K and U.S. iterations of The Office, revered sketch show The Kids in the Hall, NBC’s late night shows, and, curiously, Saved by the Bell.

After spending a few hours on Seeso, which is set up much like Netflix, it’s clear it’s trying to intimately appeal to the comedy-nerd society, reinforcing our knowledge of references and quotes with good-for-yous. It will be interesting to see if NBC becomes a destination for originals or if people will shell out for it. So far, there hasn’t been a comedy-only streaming option of this magnitude.

If you want more than SNL and 30 Rock, Seeso has an impressive vault of more obscure shows as well as originals. Here’s a guide to what to watch.

Brought to you by the Upright Citizens Brigade—Poehler, Matt Besser, Ian Roberts, and Matt Walsh—this improv, standup, and sketch show attempts to replicate the live experience of a UCB show. From the one episode on Seeso so far, it’s hard to tell if the setup is really going to work; it’s not easy to transfer the experimental, challenging format of live improv to TV, and even harder to get the casual viewer to stay tuned. But it’s exciting that someone is trying.

If you’re a fan of British comedy, you’re in luck. This BBC show about two zookeepers who go on fantastical, bizarre adventures has seen a new fandom online, and inspired many a Halloween costume.

This Channel 4 series only lasted one season in 2004, but like The Mighty Boosh, it’s thrived online in the last decade. The horror-comedy, created by Richard Ayoade (The IT Crowd) and Matthew Holness, imagines a low-budget alternate reality of fake blood and hack-author dialogue that traps you in the bowels of a haunted hospital. Would this show be popular if it came out in 2015?

6) The World of Alan Partridge

Steve Coogan built something truly timeless with the character of Alan Partridge, a talk show host (Knowing Me, Knowing You) who’s pushed down a few rungs to radio show host (I’m Alan Partridge). Partridge is constantly putting his foot in his mouth, à la Larry David, but Coogan’s strength is making his vulnerability seep in like warm milk.