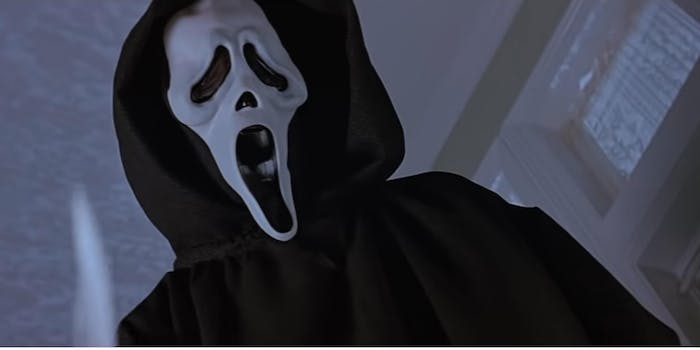 A ‘Scream 5’ movie is apparently in the works

Was that video of Courteney Cox cutting her bangs a sign?

Did Courteney Cox’s Halloween bang-cutting video jostle something in the Scream universe? That’s really the only way to explain the existence of another Scream movie coming our way.

While Cox’s Scream 3 bangs became a meme-able point of discussion this year, the video now makes a little more sense, as another installment in the horror franchise has been announced, possibly called Scream 5. Bloody Disgusting reports that Spyglass Media Group is developing the new film, and that longtime screenwriter Kevin Williamson is not involved at this point. Wes Craven, who directed all the Scream films, passed away in 2015, so it’s not clear whether this will be a sequel or a reboot.

Spyglass, in tandem with Lantern Entertainment, picked up the assets to all Dimension Films when the Weinstein Company was sold off last year. A reboot of Hellraiser from Batman v Superman writer David S. Goyer was announced in May.

David Arquette, who played Dewey in the films, said last year that even though some fans might have dropped off, there’s a “nostalgia” for the franchise. Neve Campbell, who played Sidney Prescott, has said that another film without Craven would be “challenging,” but that she might be on board. If Cox’s video is any indication, Ghostface will be back.