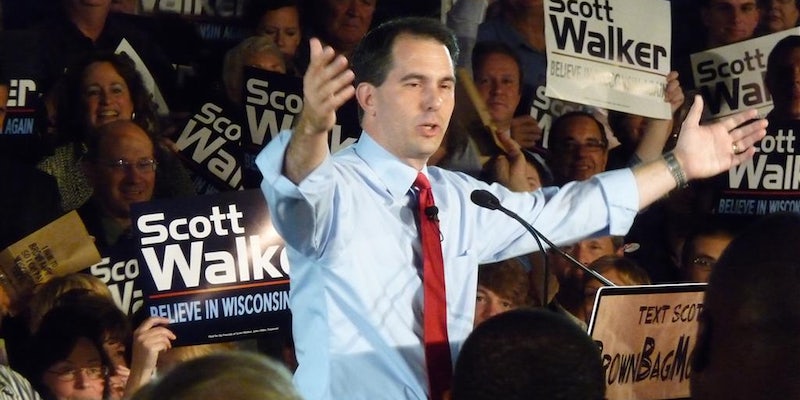 "We literally hate you."

Gov. Scott Walker (R-Wis.) had no idea that he was courting musical disaster when he walked onstage at the Iowa Freedom Summit on Saturday.

After Walker approached the podium to the tune of “I’m Shipping Up To Boston” by Dropkick Murphys, Iowans cheered as he laced into President Obama and the Democrats during a speech primed for the state’s Republican primary voters. The Washington Times said he “impressed” at the gathering of the conservative base.

Not everyone was so impressed.

Dropkick Murphys got wind of Walker’s choice of introductory music, then they band let him know how they felt about the governor associating himself with them.

This isn’t the first time that Dropkick Murphys has lashed out at Walker and his agenda. Here’s what they wrote on Facebook when the speaker of the Wisconsin State Assembly, a Republican legislator named Jeff Fitzgerald, used the same song, “I’m Shipping Up To Boston,” as entrance music at a state GOP convention.

Memo to Republican politicians: If you’re going to beat public employee unions into submission in your state and cripple their ability to bargain collectively, forget about using “I’m Shipping Up To Boston” in your triumphant strutting.

On the flip side, if Gov. Walker does what many expect him to do and run for president in 2016, presumptive Democratic nominee Hillary Clinton would be well-advised to pick up a certain Dropkick Murphys song for her entrance music.