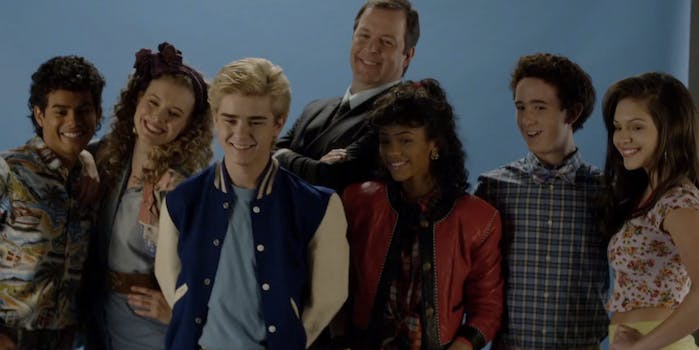 If you're expecting Shakespeare, look elsewhere. This is Lifetime.

Nineties nostalgia freaks, your time has come. Lifetime, the network that brought you Lindsay Lohan as Elizabeth Taylor and countless dramatic kidnapping tales, is turning its lens on the most iconic of ’90s teen television: Saved by the Bell.

In 2009, Dustin Diamond, who played Screech on the show, released Behind the Bell, a tell-all that revealed the state of affairs on the set of the NBC series, which turned a group of virtual unknowns into megastars. Diamond revealed threesomes, bickering, and drug addiction, and for the film, Lifetime conducted its own set of interviews to bring The Unauthorized Saved by the Bell Story to air Sept. 1. If you’re expecting Shakespeare, look elsewhere. This is Lifetime.

The two-minute clip telegraphs the amazingness to come. Tiffani Thiessen and Lark Voorhies are fighting over a coffee-swilling (we assume that’s coffee) Mark-Paul Gosselaar, and Mario Lopez can’t help but break into pushups at any moment. Even better, the six actors were selected by the original Saved by the Bell casting director, Robin Lippin.

Also, you can’t help but love a promo clip that’s unabashedly scored by Bell Biv DeVoe’s “Poison.” The ’90s were a magical time.