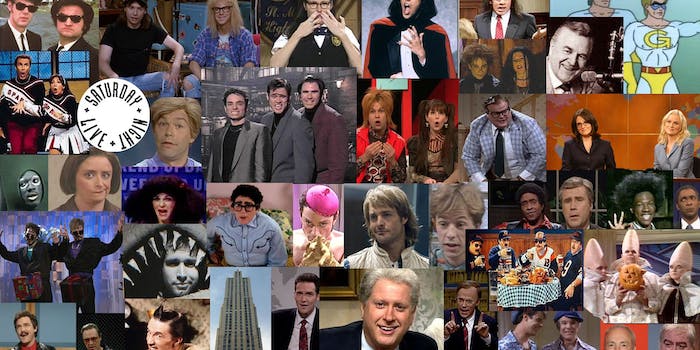 15 of the best moments in ‘Saturday Night Live’ history

Pratt, Silverman, and whoever else Lorne Michaels has in mind for the coming months will be ushering in the late night program’s 40th—yes, 40th—season on the air.

On Oct. 11, 1975, Michaels, then 30, kicked off the comedy and musical program that would go on to become a staple of popular culture. Since then, Saturday Night Live has launched the careers of countless stars, ranging from Chevy Chase and Bill Murray in the 1970s to Eddie Murphy and Phil Hartman in the 1980s to Mike Myers and Will Ferrell in the 1990s through to Tina Fey, Jimmy Fallon, and Andy Samberg today. For four full decades now, its ever-changing cast and writers have lampooned movies, television, politics, and current events in a way that has often been imitated but never successfully duplicated. In addition, the show itself has spawned several popular movies and TV programs of its own, including 30 Rock and the Wayne’s World film series.

Since NBC’s nod to the show’s milestone anniversary won’t occur until February, we decided to put together a list of some of the program’s most memorable moments from the past 40 years.

While SNL tends to begin each episode with some sort of political commentary today, this wasn’t always the case. “The Wolverines,” starring John Belushi as a foreign student and Michael O’Donoghue as his inept English teacher, was the first sketch in the program’s history. Bonus appearance by Chevy Chase (then with a full head of hair) saying “Live from New York” for the very first time.

Entertainer Andy Kaufman, one of the original trolls out there, brought his bizarre humor to the SNL stage on its second episode. Appearing nervous and saying nothing at all at first, he then began to lip-synch to the chorus from the Mighty Mouse cartoon. This appearance, as well as Kaufman’s subsequent ban from the show by audience poll in the 1980s, was documented in the 1999 biopic Man on the Moon.

British punk musician Elvis Costello was responsible for one of the first of SNL’s many, many controversies. When Costello and his band, the Attractions, appeared as a replacement for the Sex Pistols, they were contracted to play “Less Than Zero.” In the middle of the song, Costello ordered the band to stop, announced “I’m sorry, ladies and gentlemen, there’s no reason to do this song here,” and went on to play the anti-commercialization tune “Radio, Radio.” The move resulted in a 10-year ban for Costello. During the program’s 25th anniversary show in 1999, Costello would repeat the scenario (planned this time, of course) with the Beastie Boys.

SNL’s original cast—as well as Lorne Michaels—moved on after the 1979-’80 season (though Michaels would return in 1985). The program underwent its first of many cast changes, with one star rising above them all: a young man named Eddie Murphy. The comedian went on to create several hilarious characters, including a surly version of Gumby, Mister Robinson (a spoof of Mister Rogers), and the adult version of Little Rascals staple Buckwheat.

The self-deprecating humor that William Shatner has exhibited through much of his recent work likely had its start with the famous 1986 SNL sketch “Get a Life.” In the skit, which co-stars Phil Hartman, Jon Lovitz, and Dana Carvey, Shatner tells passionate Star Trek fans at a convention to “get a life” and that Star Trek was “just a TV show.” It wouldn’t be the only time SNL stars would parody geek fandom: They would later lampoon anime fans with the recurring skit “J-Pop America Fun Time Now!”

While his Wayne’s World co-star Mike Myers would go on to receive Hollywood fame, it was Dana Carvey who was the breakout SNL star in the late 1980s and early 1990s. Breathing eccentric life into original characters (Church Lady) and impersonations (George H.W. Bush), nary a skit went by without Carvey in it somewhere. His character Derek Stevens and his “hit” song “Choppin’ Broccoli” proved so popular that he would go on to recreate the moment years later during an appearance on The Tonight Show With Jimmy Fallon.

Arguably the most memorable moment of Saturday Night Live’s entire 40-year history involved a performance by singer Sinead O’Connor. In a supremely unscripted moment, O’Connor concluded her a cappella rendition of Bob Marley’s “War” by saying “Fight the real enemy” and tearing up a photo of Pope John Paul II to illustrate her disgust with allegations of sexual abuse within the Catholic Church. NBC was flooded with over 4,000 angry calls as news of the incident spread in subsequent days. On the following week’s episode, host Joe Pesci showed that they had taped the photo back together.

The early 1990s of SNL belonged to talents like Mike Myers, David Spade, Chris Rock, Adam Sandler, and, of course, the late, great Chris Farley. In one of the show’s most popular sketches, Farley and host Patrick Swayze show off their dance moves as two hopefuls auditioning to be members of the Chippendales family.

Later on in the 1990s, the successors to Farley, Sandler, and friends proved to be just as popular with audiences: It was here that talents like Norm MacDonald, Will Ferrell, and Darrell Hammond—who’s returning this season as announcer—got their starts. In a classic Christmas-themed episode of the “Delicious Dish” skit, hosts Molly Shannon and Ana Gasteyer welcome guest Pete Schweddy (Alec Baldwin) and his unintentionally hilariously named holiday treats. Baldwin, a frequent host, would go on to become a mainstay of Tina Fey’s SNL-themed sitcom 30 Rock.

With the advent of the Internet, a lot of sketches that popped up on Saturday Night Live in the early 2000s would go on to achieve everlasting life thanks to YouTube, Facebook, Reddit, and other social media. This was certainly the case with “More Cowbell,” which featured frequent guest host Christopher Walken as a music manager demanding that Blue Oyster Cult insert “more cowbell” into their classic tune “(Don’t Fear) The Reaper.”

Singer Ashlee Simpson caused quite a stir when it was revealed—live on the air—that she was a full-blown lip-syncher. She and her band began to perform “Autobiography,” but the audio track began to play “Pieces of Me.” Embarrassed and confused, she engaged in a now-famous awkward jig before walking off of the stage.

By far, cast member Andy Samberg’s “SNL Digital Shorts” were what resonated most with the Internet community. Almost every single one of the pre-taped sketches went viral as it was passed around social media during work the following Monday. By far the most renowned Digital Short was the band Lonely Planet’s “Dick in a Box,” starring Samberg and frequent SNL host Justin Timberlake.

After producing several more viral hits, including “I’m on a Boat” and “Lazy Sunday,” it was announced in August 2014 that Lonely Planet was in talks to have its own movie.

The Internet has continued to play a key role on the show. In 2012, a massive Facebook campaign resulted in the Web’s favorite foul-mouthed actress, Betty White, to land a hosting gig. White, whose episode was a colossal ratings success, became the program’s oldest host at age 88.

Since White’s successful hosting gig, the show has turned to its online audience time and time again for host and musical guest suggestions. In 2012, comedian Louis C.K.’s appearance was the direct result of a Facebook and Twitter vote.

Lonely Planet continued to nail it with pitch-perfect representations of various facets of popular culture. In May 2014, they tackled the EDM scene, in which listeners were so eager to “hear the beat drop” that, once it did, their heads exploded. Eerily enough, later that very same weekend, 29 people were hospitalized following an EDM show put on by Avicii (presumably after the beat was dropped).

No longer content with the Internet being a source for just hosts and musical guests, SNL continued to adapt to the times and began recruiting popular YouTube personalities to headline its cast. Five of last season’s new cast members, including Kyle Mooney, had very strong presences on YouTube and Tumblr prior to their tenure on the storied program.