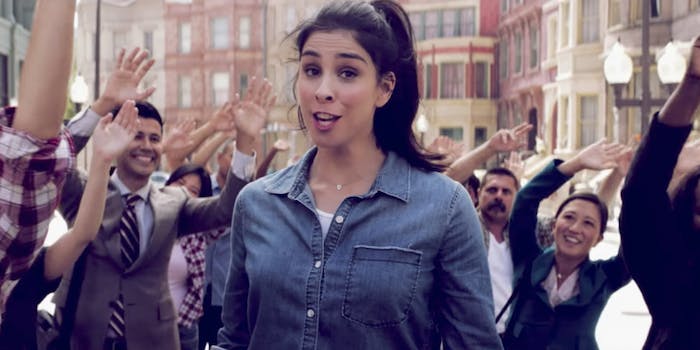 Sarah Silverman teases Hulu’s ‘I Love You, America’ with a killer musical

Sarah Silverman‘s new series premieres on Hulu this week, and she’s promoting it with a little musical number on YouTube.

I Love You, America was originally billed as an attempt to present a “balanced” view of hot-button issues—with Silverman working to find common ground with Americans whose political beliefs she might disagree with—but the musical trailer for the show seems to suggest she won’t get caught in the “both sides are the same” bias nightmare a lot of network comedies do.

In the video, the comedian walks down an all-American street, sing-announcing her admiration for all her neighbors, regardless of religion, heritage, or political ideology. But after shouting out everybody from Koreans to North Carolinians, Silverman realizes that she’s guilty of stereotyping.

“Wait a minute, what am I doing? I’m listing kinds of people,” she points out in an in-song monologue. “I’m categorizing human beings and putting them into little individual boxes. Whether I mean it or not, I’m part of the problem.”

Just like that, what started as a cheesy musical number you’d see in the first minutes of an Emmy Awards ceremony switches into an examination of identity politics. Cool.

I Love You, America premieres on Hulu Thursday Oct. 12.