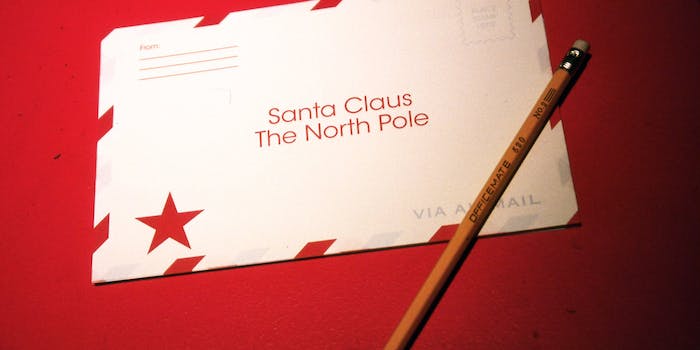 Ho Ho Ho! You don’t need a letter to reach out to Santa

It may be too late to get a letter to the North Pole. Thank your lucky reindeer you won't even need a stamp to communicate with the jolly fat guy.

While thousands of post offices around the country still receive bags full of letters addressed to Santa Claus every day, more and more folks are putting down the pen and picking up a keyboard in hopes of reaching jolly old Saint Nicholas.

Here are a few highlights.

If you’d like to listen to some classy Christmas music from Josh Groban and feast your eyes on some pleasant holiday themed photos, check out the Sincerely Santa Claus Tumblr blog.

Using the blog’s Ask feature people can send their gift requests and thoughts to Santa without worrying about postage.

Over on Twitter a handful of accounts have been answering gift requests from tweeters for weeks—even though most Christmas lists are much longer than 140 characters. @santa_claus spreads he holiday cheer, @lettersanta responds to clever requests, and @officialsanta is making sure our English friends get their lists to Saint Nicolas just in time.

But seriously, who needs to sit on Santa’s lap when you can have the man himself send a personalized video message.

Using the Twitter hashtag #o2santa, tweeters can try to grab the attention of the O2Santa YouTube channel where a sweaty Santa will respond with a short clip. Check out this clip Santa made for 36-year-old Martin O’Toole.

For those kids who love writing long lists to Santa, Facebook has a bunch of Pages and Groups where they can make their requests. Macy’s has partnered with the Make a Wish Foundation to donate $1 for every letter received.

Photo by Great Beyond