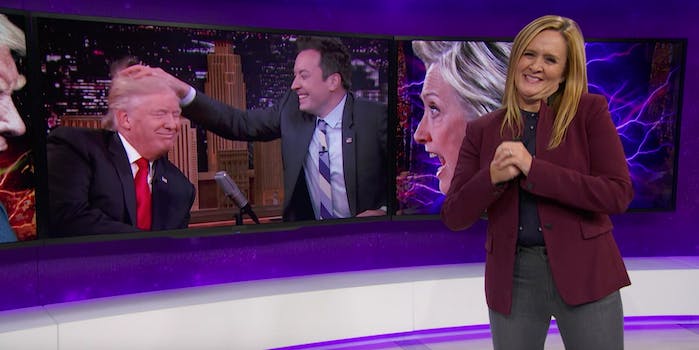 ‘I guess because ratings matter more than brown people.’

Plenty of people had harsh words for Jimmy Fallon’s Donald Trump interview last week, but the toughest criticism so far came from one of his own professional colleagues.

For the most part, the “late-night wars” are more about ratings than any actual public animosity between the hosts these days. But while the other hosts haven’t touched Fallon’s gaffe so far, Samantha Bee took both Fallon and NBC to task for normalizing Trump and his rhetoric on Monday.

Bee pointed out that NBC did disavow Trump last year after he called Mexicans “rapists,” but the network still let him host Saturday Night Live, go unchecked on The Tonight Show, and gave him an entertainment platform. According to her, parts of Trump’s audience are able to ignore Trump’s comments because they don’t affect them, which she says is as bad as saying those things yourself.

“Trump can be a total sweetheart with someone who has no reason to be terrified of him,” Bee said. “I notice there were no cutaway shots to the Roots. I wonder why?”