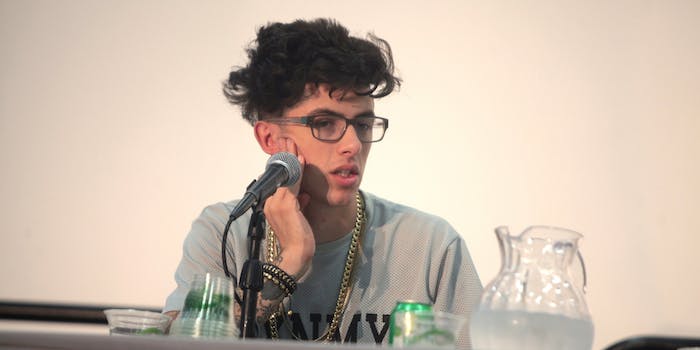 A report from the BBC revealed that the Los Angeles Police Department investigated Sam Pepper over the summer.

A report from the BBC revealed that the Los Angeles Police Department investigated Sam Pepper on “suspicion of a sexual offense.” The news came out as another woman in Los Angeles filed a police report Thursday alleging that Pepper raped her last month.

A separate 19-year-old victim explained in a YouTube that she met Pepper at the restaurant where she worked on July 17, and he invited her over to his house. He allegedly started groping her, and despite her protests that she didn’t want to have sex with him, he raped her. She posted screenshots of Kaiser Permanente Medical Center a day later and posted records which showed that a Sexual Assault Response Team (SART) exam had been conducted a day later.

She spoke with a detective, who then filed the formal complaint with the LAPD without her knowledge. Police confirmed to Newsbeat that while they questioned Pepper, he was never arrested. The district attorney’s office never filed charges against him because the victim “was not willing to testify.”

At the time, her father told her not to press charges because it might hurt her career, but after Pepper’s prank video of him grabbing girls’ butts went viral, she made a 15-minute video and told viewers what happened.

Many of Pepper’s alleged victims have now come forward to say that it was her video that inspired them to speak up about Pepper.

The 18-year-old woman who filed the police report against Pepper told BuzzFeed that she first met Pepper at a party on Sept. 5. She said he was a friend of a friend. She eventually left the party with Pepper and two of his friends and went to a café. After dropping his friends off, he took her to his house to watch some prank videos.

After she rejected some of his sexual advances, she said, he raped her.

She said that she tried leaving afterwards, but Pepper made her stay and she feared that Pepper would hurt her. She eventually left early in the morning, which is supported by an Uber receipt she provided.

Pepper allegedly threatened legal action against the woman if she filed a legal report or spoke to the press, and someone who claimed to be Pepper’s attorney threatened BuzzFeed with legal action if that story was published.

It’s not the first allegation against Pepper, who’s been accused by multiple women of taking advantage of them or engaging in inappropriate sexual conduct (some included non-consensual sex) in the past couple weeks. Dottie Martin went public with her story last week, but other stories have followed, many of them anonymous. This, along with the massive backlash and getting banned from multiple conventions following a prank video in which he grabbed girls’ butts in the name of a “social experiment,” may have led to Collective Digital Studio, his multichannel network, dropping him.

Laci Green, who helmed the effort in getting Pepper’s video banned and has spoken to many of Pepper’s victims (some who haven’t come forward yet), has updated fans indicating that more charges against Pepper may follow. She spoke to Channel 4 News about the recent allegations and noted the importance of parents speaking to their kids about sex education and what’s appropriate when it comes to meeting creators.

Pepper has largely remained silent on social media since the rape allegations came to light, but a cryptic tweet posted Thursday had negative implications.

I think this is really interesting, why we gossip https://t.co/BIFgpHiQhX

Update 4:30pm, Oct. 7:  Sam Pepper tweeted a statement from the Law Offices of Michael A. Goldstein, which reads in part: “Sam Pepper denies any and all accusations that have been made against him and will take legal action against any media outlet that continues to publish false and unverified information.”

We will continue to update this story as more information becomes available.

Correction 5:00pm, Oct. 7: This article has been amended to clarify the claims of the separate anonymous accounts.