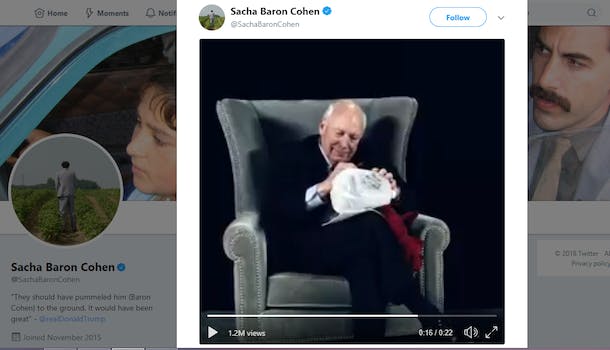 He's coming back sooner than you think.

Sacha Baron Cohen has been quiet. Perhaps too quiet. The actor, comedian, screenwriter, and all-star shit-stirrer has been flying under the radar since the 2016 film The Brothers Grimsby.

In this political climate, it was safe to assume the architect of such insane characters as Borat and Ali G would show up to satirize the current administration sooner rather than later. Indeed a recent tweet from Cohen’s official Twitter feed shows that the sooner has arrived.

Cohen will have a new show on Showtime, and the teaser trailer kicks off the fun with a bang. There’s footage of former Vice President Dick Cheney autographing a waterboard kit.

According to the show’s other vague but mildly interesting promo “Who Is America?” the project involves a new, and possibly several different, Cohen-created characters. Vulture is hypothesizing a bespectacled gent with varying tastes in eyewear while Showtime promises a “shameless,” “unhinged,” and “cold-blooded” interviewer on “perhaps the most dangerous show of all time.”

Trolling Cheney is an auspicious kickoff and we won’t have to wait long to find out who else ends up in Cohen’s crosshairs. The show will debut on July 15 on Showtime.