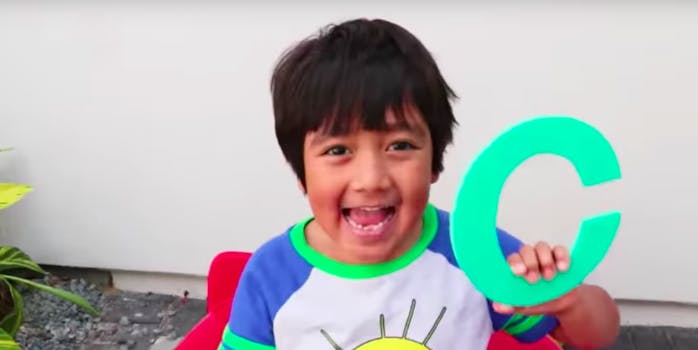 7-year-old YouTuber to get his own show on Nickelodeon

Ryan ToysReview, a 7-year-old YouTube star famous for his toy unboxing videos, will get his own television show on Nick Jr., Insider reports.

Ryan, whose YouTube channel has over 18 million subscribers, is the top earner on YouTube, according to Forbes. The 7-year-old made $22 million last year.

The child’s YouTube channel, in which he mostly unboxes and plays with toys, but also gives viewers insight into his daily routines and family life, started in 2015. Last year, he and his family launched a line of products, sold at Wal-Mart stores, under the banner Ryan’s World.

The latest venture, a series called Ryan’s Mystery Playdate, will feature the child, his parents, and two animated characters, Gus the Gummy Gator and Combo Panda, as they solve a series of challenges to “unbox” his mystery playdate.

Ryan’s family started the channel when he was just three years old. According to a profile on The Verge, Ryan asked his mother if he could do the toy review videos.

“One day, he asked me, ‘How come I’m not on YouTube when all the other kids are?’ So we just decided — yeah, we can do that. Then, we took him to the store to get his very first toy — I think it was a Lego train set — and it all started from there,” Ryan’s mother, who has not given her name in interviews, said.

“It’s the biggest of this genre of programming that is getting billions of views a week on YouTube. Really nobody is talking about it, but it’s crazy once you start scratching the surface,” Josh Cohen, the founder of Tubefilter and an industry analyst, told The Verge.

Ryan’s YouTube page says that most of the toys he plays with are donated to charity.

The Daily Dot reached out to Nickelodeon for information about the TV deal, but representatives from the company did not immediately respond to request for comment.

Ryan’s Mystery Playdate will premiere later this year and has a 20-episode order.