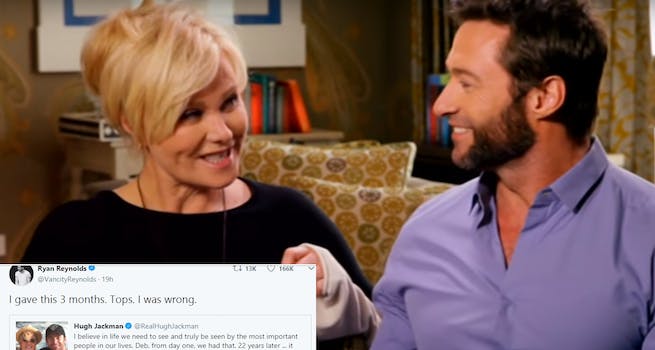 Hugh Jackman on Wednesday celebrated his 22-year anniversary with wife Deborra-Lee Furness. For Hollywood couples, that might as well be 50 years. Jackman marked the milestone with a tweet that went viral, and well, that’s where Ryan Reynolds comes in.

The Deadpool actor and snarky writer said what many fans were thinking but felt guilty about expressing: “I gave this 3 months. Tops. I was wrong,” Reynolds wrote in response to Jackman’s heartfelt public display of affection.

“I believe in life we need to see and truly be seen by the most important people in our lives. Deb, from day one, we had that. 22 years later … it only gets deeper. You and the kids are the greatest gift I will ever receive. I love you a gazillion times around the world,” Jackman wrote.

I gave this 3 months. Tops. I was wrong. https://t.co/gxXSdACQ1X

If this had been a Michelle and Barack Obama tweet, it’d be a sweet reply from Reynolds. No one doubts the former first couple’s love. But many Hollywood leading men don’t stay with the person who was by their side when they were struggling theater actors sleeping on beds with no frames. Once the money and fame come in, even woke baes like Keegan-Michael Key and Jesse Williams historically ditch their Day 1 companions. That kernel of truth in Reynolds’ obvious joke may have been self-deprecating, as he has his own history with rocky Hollywood relationships. He was previously engaged to singer Alanis Morissette, married and divorced Scarlett Johansson, and is currently married to Blake Lively. Jackman has yet to publicly quip in response.

Jackman and Furness met while filming an Australian TV show in 1995. And their love seems genuine and heartfelt. A cursory Google search reveals rare candid photos showing two people who actually look happy to be in the same room. Let’s hope Reynolds continues to eat his words for many anniversaries to come.