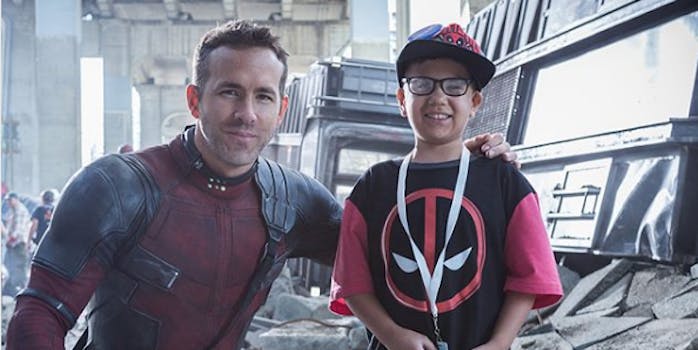 He wasn't having it.

Ryan Reynolds set Instagram commenters straight this week after being criticized for welcoming terminally ill children behind the scenes on one of his movies.

It all started Monday with Reynolds Instagramming pics of himself with kids from the Make-A-Wish foundation on the Deadpool set. The foundation helps fulfill wishes for children with serious illnesses, and Reynolds’ young fans are understandably inspired by the superhero character who not only beats cancer himself but keeps a sense of humor about it. The movie’s prop master made each visiting child their own bamboo sword, and Reynolds gave the kids and their families a tour of the movie set while donning his red costume.

Pretty sweet stuff from the dad of two.

Some commenters had a bone to pick, though. For around every 10 positive, “Thanks for doing this!”-style comments in over 7,000 replies Reynolds has received so far, there are one or two people wondering why kids were allowed on the set of a movie that will most likely be getting an R rating in theaters.

Reynolds wasn’t having it, though. He circled back around Wednesday and explained why the movie’s rating wasn’t an issue to him: