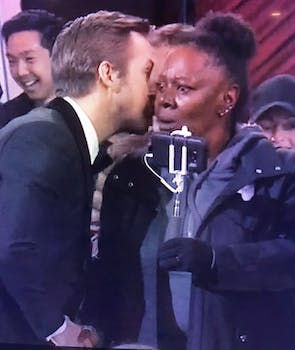 Ryan Gosling didn’t win best actor, but he did inspire this Oscars meme

It all began when Jimmy Kimmel welcomed tourists to the stage.

What’s better than winning an Academy Award at the Oscars? Inspiring a meme, obviously.

Ryan Gosling has been a classic meme since 2008 when “Hey girl…” went viral, but he earned himself a new one Sunday night at the 89th annual Oscars. It all began when host Jimmy Kimmel welcomed some unsuspecting tourists to the stage.

“Welcome to the Dolby Theatre, the home of the Academy Awards, which are in fact happening right now,” Kimmel told the tourists as they entered the room.

He then began to introduce the tourists to celebrities in the audience, including Nicole Kidman and Ryan Gosling.

Ryan Gosling introducing himself to all the bus tour people is the most Canadian thing anyone could do. 🇨🇦 #Oscars

As one shocked woman from the group of tourists walked along the aisles, Gosling got up to introduce himself and welcome her to the show. This one moment caught on camera has led viewers on Twitter to guess what Gosling could have whispered in the woman’s ear.

when Ryan Gosling wants to kiss u #Oscars pic.twitter.com/dQSQhYacpU

When Ryan Gosling hits you with a "Hey, girl." on live TV #Oscars pic.twitter.com/NvDwACFeDn

Gosling isn’t the only person at the Oscars to inspire a meme. One of the tourists, Gary from Chicago, earned a place in everyone’s hearts with his “performance” Sunday night.