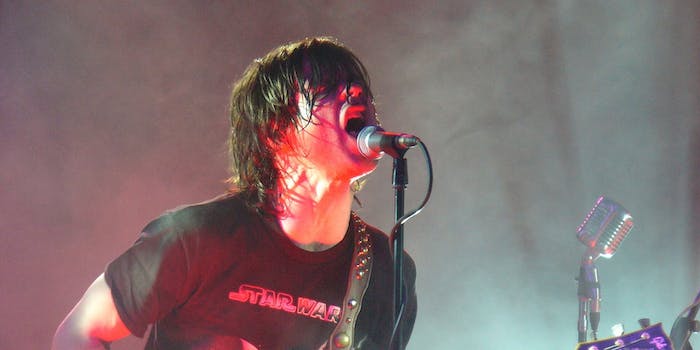 Alt-country singer Ryan Adams is no stranger to conflict, often taking to Twitter to express his displeasure with the media. It’s unsurprising, then, that he voiced his frustration with indie music news site Stereogum Wednesday, accusing it of “exploiting [his] illness for page clicks.”

Stereogum posted a story this afternoon of the singer stopping mid-performance last night at Philadelphia’s Tower Theatre, to take a front-row concertgoer to task for taking multiple flash photos, which could potentially trigger his Meniere’s disease—an inner ear disorder that causes vertigo, nausea, and vomiting, and is affected by flashing lights. Adams was in the middle of his 2001 hit single “Oh My Sweet Carolina,” when he stopped the band, and began sternly lecturing a female fan in the front row, reminding her that he had mentioned his Meniere’s light sensitivity earlier in the show.

In the nearly minute-long lecture (which begins around the 2:40 mark), Adams admonishes the woman, and uses some incredibly choice language, but never quite yells—though it’s clear he’s more than a little frustrated. “Sorry can you fucking, can you cut that off? Oh my god, did you hear me talking about flashing things in my eyes? I have fucking Meniere’s disease, can you stop? Can you just stop in the front row with the flashes? Literally, you’re wrecking the whole show, please, just stop. I’m sorry, I have a disability it’s called Meniere’s disease, and you flashing me with your camera, I get so dizzy I want to throw up, I can barely stand up straight. Please, that’s all I ask, just put a piece of tape over it. Seriously, how many songs do I have to wreck? Hi, my name is Ryan and I have Ménière’s Disease. If you flash me with your camera, it feels like you took a lightsaber and you sliced my brain in half. Just stop it, seriously, so we can play the show, please? Thank you.”

After a fellow concert attendee uploaded video of the performance to YouTube, along with Adams’ lecture, Stereogum picked up the story and tweeted it out with a slightly sensationalized caption.

In less than an hour, Adams had replied to Stereogum, insinuating that it was exploiting his illness solely for page views.

Wow @stereogum You have no shame. Exploiting my illness for page clicks.
Wow.
Fuck you.

Fans rushed to Adams’ defense, including some who were at the show and claimed that Adams’ had asked fans multiple times kindly to not use flash photography.

@TheRyanAdams @stereogum I was there; this was after numerous kind requests to stop, and before apologizing to her at the end. Get it right.

@stereogum @TheRyanAdams I was there. He handled 1st x w/ humility, care & kindness. 2nd x he was more pointed. Shouldnt have been a 2nd x.

@stereogum @TheRyanAdams was 4th row Could see his physical response 2 light/flash. He fights hard 2 keep making music. So grateful he does.

Adams has been speaking openly about his struggle with Meniere’s disease and tinnitus, opening up to Us Weekly back in 2009 about how the disease sidelined him from music for almost two years. Says Adams, “[I was] really suffering from an inner ear disease called Meniere’s disease and all the stuff that goes along with it, which is a lot of vertigo, balance issues, and problems with depth perception. When I was on stage, with one shift in the lighting, I couldn’t quite see where to put my foot, and it made it really, really difficult for me to just do what I needed to do with my band.” He sat down with Rolling Stone this summer about his battle back to playing music, as well as some of the alternative therapies he uses to control his Meniere’s, including hypnotherapy, yoga, and medical marijuana. Adams even did an extensive interview with Stereogum this September about his self-titled new album, and his disability, which is likely what ruffled his feathers when seeing Stereogum describe his diatribe just two months later.

It’s not the first time that Adams has gotten touchy with the media. He described to BuzzFeed in an interview earlier this year how he hung up on a Melbourne DJ who asked too many personal questions about his marriage to pop singer and actress Mandy Moore. In 2013, Adams tweeted at conservative talking head Sean Hannity, calling the news host a “little chicken man” and accusing him of being “controlled by fear and hate,” in response to  Hannity tweeting about the lack of role models in celebrity culture.

It’s not even the first time he’s been less than pleased with Stereogum. Earlier in 2013, he tweeted at Stereogum about its take on Morbid Angel’s death metal album Covenant as being “subjective, but so wrong.” Stereogum also extensively covered Adams’ 2008 falling out with singer Courtney Love, who accused Adams of stealing almost $1 million from her daughter Frances Bean Cobain’s trust fund to finance his 2003 album, Rock N Roll. Stereogum has yet to delete its tweet.