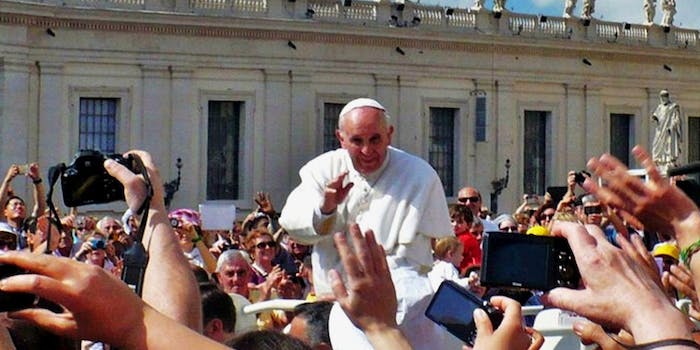 Russell Crowe's campaign to get the pope to see 'Noah' is looking pretty futile.

When it comes to attracting audiences, actor Russell Crowe sets his aim pretty high. He wants Pope Francis I to see his latest movie Noah.

The film, starring Crowe in the title role, tells the story of the famous Biblical figure who corralled two of every animal aboard an ark in order to preserve life after the Great Flood. The film is scheduled to be released March 28.

On Feb. 22, Crowe tweeted a request for the head of the Catholic Church to see the film.

Dear Holy Father @Pontifex , would you like to see @DarrenAronofsky film #NOAH ? I am sure you would find it fascinating.

In the subsequent days, Crowe continued to flood @Pontifex with requests.

Dear Holy Father @Pontifex , Sorry that I have caused havoc in your social media world. Seriously though, #Noah the movie will fascinate you

Unfortunately for Crowe, there might not be a chance that Pope Francis I will ever see Noah—or any other movie, for that matter.

“The Holy Father does not see films, and will not be seeing this one,” a representative for the pontiff said in a statement after receiving an invitation to watch the Harvey Weinstein film Philomena.

Talk about a life of sacrifice: Imagine spending an entire lifetime without ever laying eyes on such masterpieces as Idiocracy or Office Space.

Perhaps Crowe should shift his focus and beg us to see his movie.