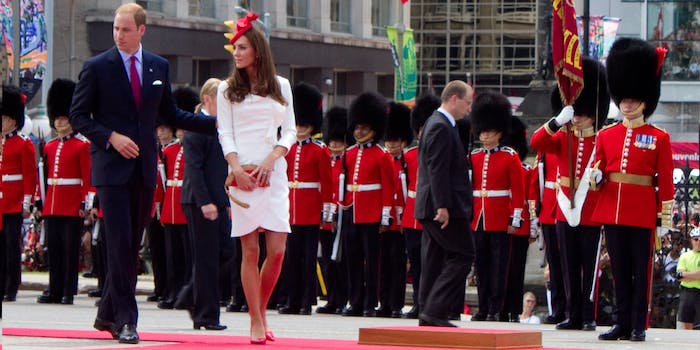 New guidelines implemented this year have many people crying foul about another royal baby.

Prince William and the Duchess of Cambridge are expecting their third child, and U.K. Twitter is all over this news.

Royal babies provide a double dose of Twitter joke fodder: celebrity gossip, and the opportunity to make fun of weird rich people. So along with all the genuinely positive comments, Twitter is now rife with very British jokes about Prince William’s fully receded hairline.

One can confirm that the Duchess of Cambridge is expecting her third child. Prince William needs all the heir he can get. #RoyalBaby

Then there’s the sequel jokes. (Do we really need three royal baby news cycles in such quick succession?)

And finally, there’s the less enthusiastic feedback. Alongside the typical complaints about overzealous media coverage for royal gossip, there’s a serious political side to Wills and Kate having a third child. The royal family receives a lot of taxpayer funding, while poorer families are effectively penalized for having more than two children.

Of course, with the government's new 2 child limit, I presume William and Kate's third child will receive no state support. #royalbaby

These tweets refer to the government’s new rules for child tax credits, a financial benefit for low-income families. Announced in 2015 and implemented this year, the new guidelines only allow tax credits for the first two children born into a family. It’s meant to discourage people from having children they “can’t afford,” but critics argue that it simply punishes poor babies for being born. Plus, the new rules include the infamous “rape clause,” where mothers can receive tax credits for a third child if they prove that pregnancy was the result of rape.

The so-called rape clause was met with backlash across the U.K., ranging from street protests to public pushback from political leaders. So while it doesn’t have a direct link to the royal family, it was fresh in people’s minds when they heard the news about a third baby for Prince William and the Duchess of Cambridge. For many people, it’s hard to get excited about a publicly subsidized millionaire baby when so many children will be born into poverty at the same time.