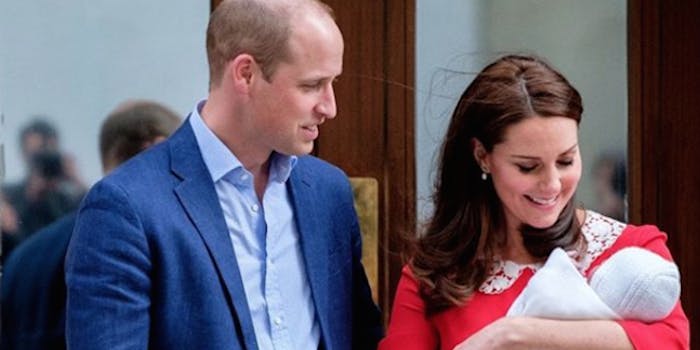 After holding the world in suspense all week, England’s royal family announced the name of its newest member Friday morning: Louis Arthur Charles.

The name (pronounced Louie, not Lewis) is a nod to Prince Charles’ great-uncle and mentor Louis Mountbatten, who was killed in 1979. It’s been called “a sentimental choice,” though the name also appears in 4-year-old Prince George’s name and babydaddy Prince William’s name too—it’s safe to say Mountbatten was a popular relative.

The royal infant’s name trended worldwide on Twitter all morning, with a significant number of people wondering if maybe (just maybe) Kate Middleton‘s inspiration was One Direction-related. There are press photos of her meeting Louis Tomlinson, after all.

Here are some of the best reactions:

Has the Royal family just run out of names then? Welcome, Prince Louis Arthur Charles 👶🏻👑 pic.twitter.com/wOyqLgcUfj

How do you pronounce Louis?

Seems like we aren’t the only ones who miss 1D.

«"Louis Arthur Charles", William said quietly, so that nobody but Kate could hear, "you were named after a member of One Direction and he was probably the bravest man I ever knew.»

Kate meets Louis Tomlinson on stage as they attend the Royal Variety Performance November 24, 2017, Today, The Duke and Duchess of Cambridge announce that they have named their son Louis Arthur Charles. #justsaying pic.twitter.com/TfdJIA6YRO

Our long agonizing wait is finally over.