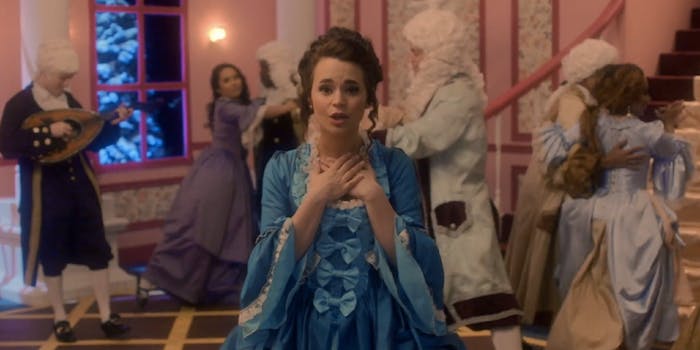 Pansino hosted a Valentine’s-themed launch party at YouTube Space L.A. on Friday, complete with candy hearts and a chocolate fountain, and played the video for fans and friends, some of whom made cameos in the Beauty and the Beast-inspired video. Pansino said she started the writing process with fellow YouTuber Kurt Hugo Schneider, who helped her develop what she described as a “really sweet, simple acoustic love song.”

This is not Pansino’s first time singing, but it’s definitely a departure from her Nerdy Nummies cooking show, which earned her 3.3 million subscribers and a spot as one of the three original YouTubers the platform promoted with an offline ad campaign last year.

“I’ve always been interested in music,” Pansino said. “In high school, I did a lot of musical theater, and I loved it. When I started creating my content, the first thing I made was a baking series. That did really well, my community really responded to that. I sing a little bit in videos, at the end of vlogs. A lot of my fans started requesting that I do a song. They started planting this seed in me.”

Pansino emphasized her family-friendly nature extends to her music, giggling over a lyric that she deemed racy. (“‘If you were hot cocoa, I’d be the winter night you stay in.’ That’s the only racy one!”)

“We like to make content that’s family-friendly,” she said. “The same with music. I like to make music that feels good, that I can listen to with my mom and dad. I don’t think you’ll see me swinging on a wrecking ball any time soon! But if I do, that will be a day! My dad might have a heart attack.”

Worst-case scenario, you’ll get a nasty toothache from all the sweetness in “Perfect Together,” so Pansino has nothing to worry about.