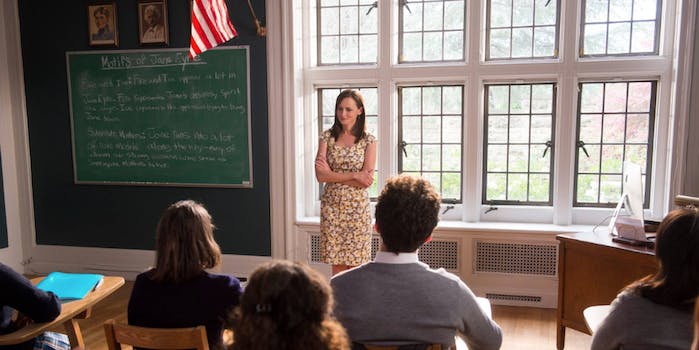 Team Jess, Team Dean, and Team Logan are all wrong for Rory—here’s why

We’re still holding out for a last-minute cameo.

One of the biggest questions on the minds of Gilmore Girls fans everywhere, as the Netflix revival draws nearer and nearer is… who will Rory (Alexis Bledel) end up with when all is said and done?

The original series ended with Rory choosing herself and her career over love with her steady Yale boyfriend Logan Huntzberger (Matt Czuchry), so it’s unlikely she’ll make that same choice at the end of Gilmore Girls: A Year in the Life. Narratively, fans are expecting some kind of romantic payoff for Rory.

The questions remains though, will she give Logan another shot, find her way back to her first love Dean (Jared Padalecki), or finally get the timing right with fan-favorite Jess (Milo Ventimiglia).

We’d like to posit a different option altogether and suggest that maybe none of the above is the right option for her. We’re actually rooting for bad-boy Tristan Dugray (Chad Michael Murray) from Gilmore Girls‘ early years to show up as the dark horse in this race.

Most of Tristan’s time was spent teasing and torturing Rory at Chilton before he was quite suddenly sent off to military school for breaking into his friend’s father’s safe in an episode titled “Run Away, Little Boy” (i.e. he booked a leading role on One Tree Hill and peaced out).

Tristan was never seen or heard from again, which was kind of shame, all things considered.

While the majority of Gilmore fans dismiss Tristan as an arrogant, over-privileged jerk (which he totally is), he undoubtedly had a bit of a soft side for Rory.

He never quite made it past “tormentor” into “love interest” territory—besides that one teary kiss in season 1—but there was always definite potential there. Now, 15 years later, we’re curious what Tristan Dugray is up to.

Did military school iron him out and smooth out those pesky, conceited edges of his? Did he perhaps use those wits of his for good instead of evil?

Much like Jess, who left the show only to pop up years later as almost a completely changed man thanks to some off-screen character building, we’d argue Tristan could make a mighty return to Gilmore Girls: A Year in the Life as a more grounded version of the cocky kid we bid farewell to in season 2.

Obviously, this is a bit of a pipe dream, since Chad Michael Murray has not been linked to the revival in any way, shape, or form, but we’re still holding out for a last-minute cameo.

Gilmore Girls: A Year in the Life premieres at 12am ET/PT on Nov. 25 on Netflix.