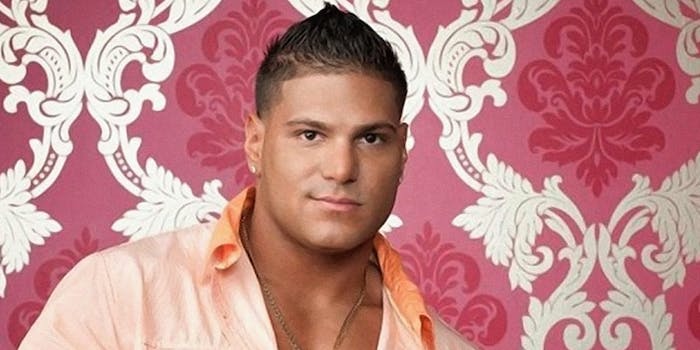 The livestream was abrupt and terrifying.

Ronnie Ortiz-Magro from Jersey Shore got into an aggressive and abusive fight with girlfriend Jen Harley on Monday, and she broadcast the incident via Instagram Live. Following the confrontation, the two have reportedly parted ways. The couple has been arguing recently and airing grievances via Instagram Stories.

“You want the fucking Live shit?” Ortiz-Magro yells in the Live video, which was recorded and sent to TMZ. He apparently wrestles toward Harley, who gave birth to the couple’s daughter this month, and knocks the phone out of her hand. “How fucking dare you?” he adds before the livestream cuts off.

“Ron stop,” a woman can be heard saying.

In footage obtained by the New York Daily News, it’s more of the same: “Don’t put your hands on me again,” Ortiz-Magro says, apparently flaunting sexually explicit videos of Harley on a phone. “Put your fucking hands on me again… I fucking dare you.”

Ortiz-Magro detailed the weekend-long conflict via Instagram Stories. On Sunday, he wrote “Can’t turn a natural born HOE, into a HOUSE WIFE. If you find them in the gutter [then] leave them in the gutter.” Shortly after he seemed to explain himself: “If your significant other keeps sex videos of their ex, shouldn’t they show enough respect to delete them, esp. after being in a new relationship for over a year[?]” The question included a “yes/no” poll for fans to vote on.

Harley responded via an Instagram Story of her own that read: “Can’t turn a coke head into a father!” She has since apparently deleted her Instagram profile as of Monday afternoon.

Late Sunday, Ortiz-Magro apologized on social media. It’s unclear what started the conflict, but in addition to Ortiz-Magro accusing his girlfriend of keeping sexually explicit videos of her ex, the most recent episode of Jersey Shore featured 1) Ortiz-Magro taking a woman home to the group house (his roommates intervened before the two hooked up); 2) Ortiz-Magro saying he still has feelings for Sammi “Sweetheart” Giancola, his longtime romantic interest in the reality TV series; and 3) Ortiz-Magro saying he doesn’t think Harley is “the one.”

People reports that Harley kicked out Ortiz-Magro two weeks ago and that he’s “melting down.”