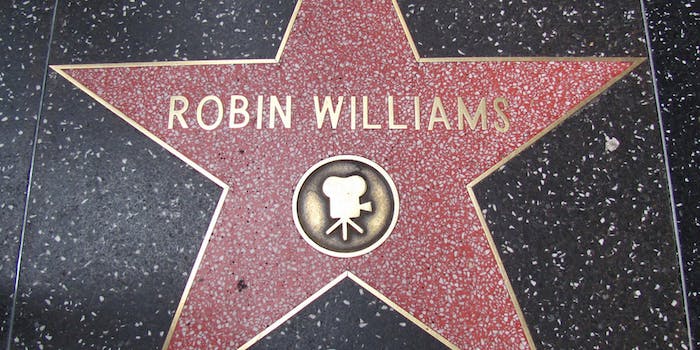 "It is our hope the focus will be not on Robin's death, but on the countless moments of joy and laughter he gave to millions."

With all of his memorable film and TV credits to his name, I will always remember Robin Williams for one of his least public performances.

In 1997, Williams presented the eulogy at the funeral of Herb Caen, the iconic San Francisco Chronicle columnist. Although not a native of San Francisco, Williams could frequently be seen around town with a smile on his face. This morning, he died across the Golden Gate Bridge in Marin County.

In a statement, his widow, Susan Schneider said, “As he is remembered, it is our hope the focus will not be on Robin’s death, but on the countless moments of joy and laughter he gave to millions.”

No doubt, each Robin Williams fan has his or her own favorite scenes, lines, or gags this brilliant comedian brought to the world, and he will forever be in our hearts and on our TVs and tablets via Netflix and film/TV reruns. He had the opportunity to work with some of the best actors and directors of his time, including Gus Van Zant, Barry Levinson, Billy Crystal, Whoopi Goldberg, and Dustin Hoffman (to name a few).

He launched his career as a stand-up comedian in the Bay Area at such clubs as the Great American Music Hall and Punch Line, but his most notable claim to fame was as Mork in the sitcom Mork and Mindy. The phrase “nanu-nanu” belongs in the time capsule of ’90s pop culture and was the first in an endless parade of indelible memories. Here are just a few:

The wisecracking genie in Aladdin:

As Adrian Cronauer, the radio personality in Good Morning Vietnam:

The therapist in Good Will Hunting:

As the owner of a drag queen club in South Beach in The Birdcage:

And last but not least, as Mork from Ork first appearing on Happy Days:

Williams, who died at age 63, can be seen in wide variety of films available on Netflix, including: The Big Wedding, Hook, Jumanji, The Birdcage, World’s Greatest Dad, Popeye, and The Fisher King. On Hulu Plus, you can find Moscow on the Hudson, The Survivors, and The Best of Times. Episodes of Mork and Mindy are also on Hulu.