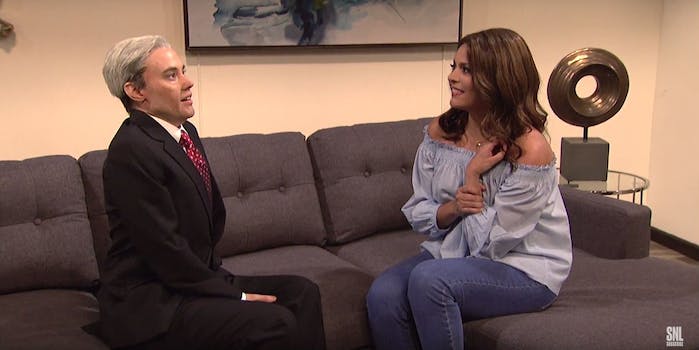 Robert Mueller drops a bombshell on ‘SNL’s ‘The Bachelor’ parody

This is so awkward.

Reality TV managed to be as unpredictable as our political landscape this week, and Saturday Night Live highlighted the increasingly rare moment by combining the two.

In a parody of this week’s jaw-dropping turn of events on The Bachelor, special counsel Robert Mueller (played by the always-hilarious Kate McKinnon) sits down Becca K. (SNL’s Cecily Strong) to explain some bad news.

Instead of suddenly dumping her, as Arie did on The Bachelor, Mueller awkwardly says that he’s “only half-in with collusion.”

Becca K. tearfully asks if indicting 13 Russians and “everything that happened in the Seychelles” means nothing to him, as Mueller fumbles with excuses about not being able to commit. Becca K. is understandably devastated as Mueller explains she’s looking at probably six more years of the Trump administration and the only silver lining is for those invested in American Steel.

The real The Bachelor finale was already enough of a gut-punch for fans of the show, but SNL figured out a way to really hit us where it hurts.