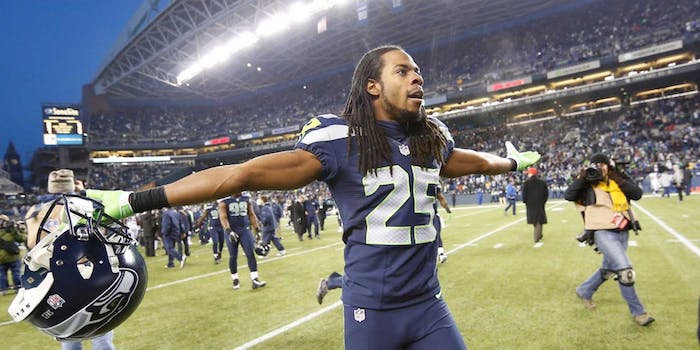 Want to know exactly how much trash Sherman talked during the Seahawks-49ers game?

Words have consequences, as evidenced by this clip.

Richard Sherman is not a quiet guy. If you weren’t already acquainted with the brash antics and uncontainable bravado of the Seahawks cornerback before this past Sunday, then you certainly were after it. Following Seattle’s NFC Championship win, Sherman’s now-infamous interview with a nearly speechless Erin Andrews set viewers everywhere running for their keyboards. Whether you were laughing at Andrew’s befuddlement, enjoying Sherman’s adrenaline rush, or saying some extremely racist things, you had a reaction.

Following the viral video, Sherman wrote his own op-ed to explain and defend himself against the critics calling him a thug. Though well-written, the account was just that: An account; one side of the story. Now, however, the sound bites behind the scuffle and ensuing drama have been released.

Both Sherman and his opponent Michael Crabtree were wearing mics during the game. According to the tapes, and as you can hear above, Sherman said, “hell of a game, hell of a game.” And then Crabtree shoved his helmet.

Now, though Sherman is generally a softer, kinder personality off the field, he is well known for his in-game trash talk (which you can see from the rest of the video). The comment could have been a sarcastic one after Crabtree failed to make what would have been the 49ers’ game winning touchdown. Or Crabtree could have interpreted it as such.

Or maybe he was just mad that his team lost and that Sherman (who admittedly talks a lot) had just tipped a pass that would have sent him to the Super Bowl. All we have are the sound bites; the rest will remain on the field.