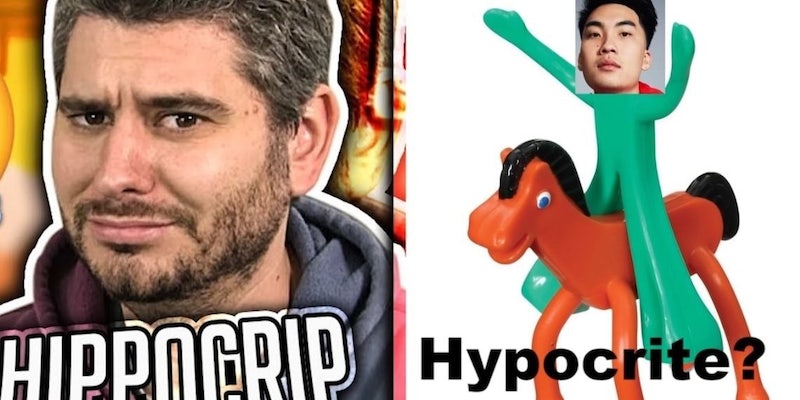 YouTube beef between RiceGum and H3H3 gets ugly—and personal

Klein even made a diss track against RiceGum.

Ever since YouTube star RiceGum faced massive online criticism for promoting a gambling site to his young audience, he and H3H3’s Ethan Klein have been feuding. But now that RiceGum has targeted Klein’s wife in a recent video, Klein has turned up the heat on RiceGum.

After Klein made a critical video of RiceGum (and Jake Paul) for promoting a website called Mystery Box earlier this month, RiceGum—whose real name is Brian Le—responded a few days later by calling Klein a “grandpa” and saying he was a hypocrite. But what really upset Klein was when RiceGum made fun of his wife, Hila Klein, calling her “wack” and “monotone Monica.”

“’I think this fool is depressed or whatever because his girl be so wack,” RiceGum said. “Somebody has to say it. Every time his girl is in a video, it’s just crickets. … She’s just so boring. Maybe you’re so bored with her. Surround yourself with high-energy girls. You probably can. You’ve got the money and the clout.”

Unsurprisingly, those insults didn’t sit well with Klein, who had previously discussed his battles with depression and anxiety. In a video posted on Sunday, titled “RiceGum Digs A Hole And Jumps In It,” Klein unleashed his fury on RiceGum.

He started his video by proclaiming he will refer to RiceGum as RiceGumby from now, because “Just like the toy Gumby, he’s soft, enjoyed by 10-year-olds, and forgotten about by most people.” Then, Klein—who has 6.1 million subscribers compared to RiceGum’s 10 million—unleashed a diss track, featuring footage of Hila Klein dancing with an ironically nerdy-looking outfit. He rapped about how the Israeli-born Hila Klein is a self-made millionaire who served in her country’s military.

Klein contrasted that with RiceGum, who Klein maintains “chase[s] clout to fill a hole in your soul/Without substance, you will disappear/You need love son, I wish your mom would hear/Your bitterness comes from the reality/That the most interesting thing about you/Is your money.”

Klein also said RiceGum’s pageviews are down because his young audience is growing up and losing interest in him.

Klein continued by ripping on RiceGum’s original apology for the Mystery Box, where he gave away Amazon codes that had already been redeemed months before.

“I wonder if he spent them on tissues to wipe the tears away when he realized the girls he pays to pretend that they like him don’t actually like him,” Klein said.

Klein’s main point, though, was simple: Don’t make fun of his wife.

“I’ve got the best girl in the freaking world,” he said. “If you’re going to come after me, you’d better come harder than that, dog. And I don’t even have to pay her to pretend to like me.”