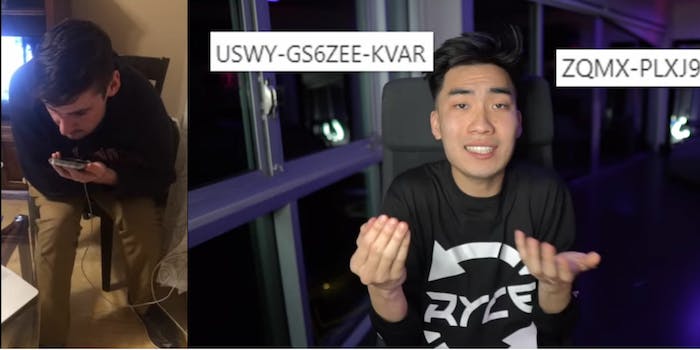 Did YouTube star RiceGum give away expired Amazon codes to his fans?

In one of the first YouTube controversies of 2019, Jake Paul and Bryan “RiceGum” Le were called out last week for promoting what many saw as a gambling site to their young audiences. RiceGum’s apology video tried to lure burned viewers back with Amazon codes for “$10 to $20.” But when a pair of YouTube vigilantes calling themselves “Good Day Sir” tested those codes, they tell the Daily Dot that many of them were redeemed as far back as May.

In a video uploaded on Jan. 3, RiceGum apologized for promoting MysteryBox, a company that sells mystery boxes of goods that tease expensive electronics and goods. He also made nearly five minutes worth of excuses for himself, and blamed other YouTube stars for also scamming kids. At the conclusion of the video, he threw out 18 Amazon codes, which should have totaled anywhere from $180 to $360.

“Just a little giveaway,” he said. “It’s the least I can do after this.”

When Good Day Sir watched the video, they decided to check the codes. After writing down the first four codes given by RiceGum, Good Day Sir called Amazon to redeem them.

They broke down their method in a Twitter thread, as well as a video uploaded to YouTube. They weren’t the only ones either. YouTuber Amanda the Jedi also broke down the RiceGum code controversy in a video.

It’s a pretty good way to motivate subscribers to be attentively looking for the next video so they can have a chance to fetch that 10,20,50 or 100$ gift card!

Personally to me it would be a #scam! It is using your followers trust and giving them fake hope that they have a chance of winning something they will actually never win

Well they were claimed (meaning USED) in MAY 2018! 8 months ago! The first four gift card codes @RiceGum gives us as his way to apologize for promoting a scam gambling site to minors were used MONTHS AGO!

After speaking with an Amazon representative, Good Day Sir said they found that all of the codes had already been redeemed. Given the number of codes compared to RiceGum’s follower count, that isn’t surprising. The date they were reportedly redeemed—May 2018—was. Those codes were gone a full seven months before RiceGum’s video was even made.

Not wanting to take more time from the Amazon employee checking the codes, Good Day Sir left it at four. Once the video gained steam this week on Reddit, however, they decided it was worth checking the remaining codes.

In a second video, Good Day Sir showed themselves discussing the remaining codes with an Amazon representative and coming to the same conclusion: All of the codes were redeemed last year.

Though they stressed that RiceGum may not have even known he was giving out unusable codes, Good Say Sir noted that “we think that as the owner of the channel he is responsible for what is posted on his channel, and therefore he needs to address this problem.”

We’ve reached out to RiceGum.