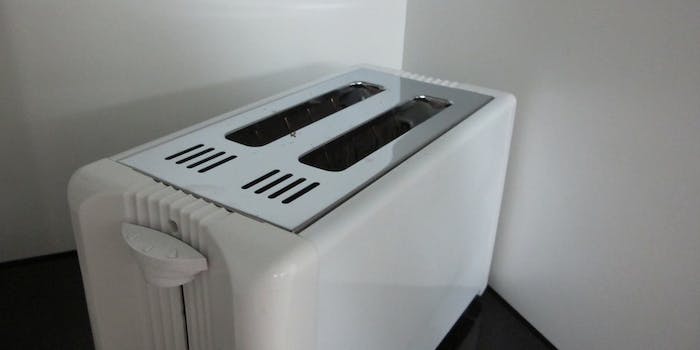 More than 1,600 users have come together on the social news site to reclaim toasters' importance in the kitchen.

This election season, the campaigns between President Obama and challenger Mitt Romney have touched upon many topics: the economy, healthcare, Big Bird. While these issues are of sizeable importance to people and felt puppets everywhere, there is still nothing whatsoever being done about the rights of toasters.

You might view your toaster as nothing more than a device that crispens a few slices of bread for your breakfast each morning. Its feelings, desires, and even history are of little, if any, importance to you. Sadly, such ignorance has allowed these beloved kitchen staples to make it all the way to the 21st century without even the most basic rights that you take for granted.

Fortunately, r/toasterrights, a surprisingly popular section on social news site Reddit, has been created to raise awareness of the injustices being experienced by toasters everywhere. Thanks to redditor THE_HUMAN_TREE, the devices finally have a voice.

“This subreddit was originally created (by me) to grant toasters the right of gay marriage, but I then realized that we had a lot of way to go before something of that volume could even hope of being accomplished,” THE_HUMAN_TREE explained to the Daily Dot. “Toasters are underappreciated. Blenders and ovens are commodities, while toasters are being shoved out of the spotlight.”

Fellow moderator nicksatdown believes that toasters are not only being ignored, but that they also suffer regular abuse.

“They have been mistreated for years,” he stated. “Blenders and ovens get all the attention, toasters are tossed after a few years, treated like garbage. We are here to spread awareness of the misuse and abuse!”

It wasn’t always so bad for toasters. As recently as 20 years ago, things were a lot different.

“Twenty years ago, toasters were living the high life. They were revolutionary in the appliance industry, the gold standard.”

Unfortunately, as kitchen appliances became more plentiful and advanced, toasters became more and more overlooked. Refrigerators can now make ice and broadcast television. Microwaves can be used not only for cooking, but also as a clock or timer. While the versatility and efficiency that these appliances have enjoyed is commendable, their main purposes tend to get lost in the confusion. Toasters, while appearing simple, lack this setback.

“It has one job, but it does that job very well,” THE_HUMAN_TREE said. “The toaster is the most effective way to heat/toast a piece of bread.”

With over 1,600 subscribers, r/toasterrights, which has been deemed a popular community, has no shortage of support. One thread focuses on the topic of anti-toaster bullying. Another invites discussion on the issues faced by female toasters.

Election Day is nearing. You will soon step into the voting booth and help decide the fate of your fellow citizens. While this is going on, the device that made your English muffin nice and crispy before you left the house sits ignored on your kitchen counter. It not only doesn’t get to vote, but it also sees no benefits from your own action at the polls.

It doesn’t have to be this way, though.

If you are a champion of the advancement of toasters everywhere, r/toasterrights welcomes your support, stories, and ideas. Should you decide to join and become a “toaster activist,” it is requested that you keep toaster pictures SFW (that is, with a case on) and that you denounce microwaves, the toaster’s mortal enemy.