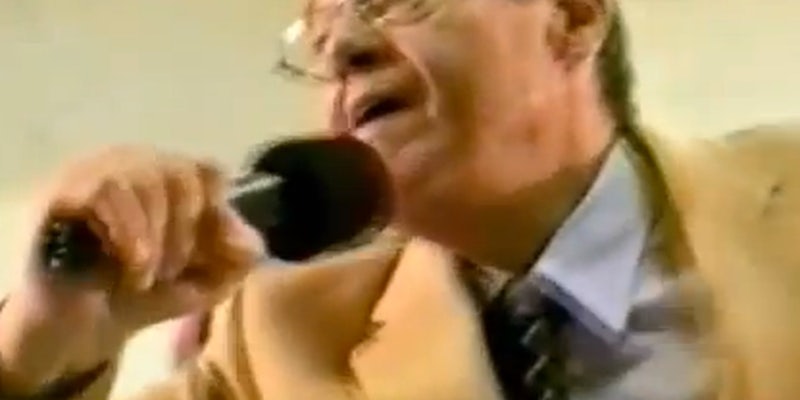 That “Rappin’ for Jesus” video is obviously fake

The low-tech music video finds a pastor named Jim Colerick and his wife rapping about their relationship with Jesus Christ, and it's racked up more than 600,000 views, thanks to outrageous language.

“Rappin’ for Jesus” is getting popular on YouTube for all the wrong reasons.

The low-tech music video finds a pastor named Jim Colerick and his wife rapping about their relationship with Jesus Christ, calling him a life changer, miracle arranger, and “drink exchanger” who once turned water to wine.

The track goes on to list a number of the other elementary conceptions concerning who Jesus was and what exactly he did, according to the stories of the Bible.

The general sentiment of the track is silly and a little childish but not altogether too disrespectful, until you get to the chorus.

It’s at that point that Pastor Colerick reveals his line of thinking that “Jesus Christ is my n*****, a sort of eye-popping declaration that’s both factually inaccurate and rooted in cultural hate. The line’s repeated over and over again, by both the pastor and his wife, so much so that the video has been viewed more than 600,000 in the past week.

“Rappin’ for Jesus” was uploaded on Feb. 5 by a man named Brian Spinney, an Iowan father who claims to have helped the pastor make the music video a few years ago while he was in high school.

Sounds good, right? The story begins to unravel shortly after that.

Colerick’s purported place of preaching in the video is a church in Dubuque, Iowa, called the West Dubuque 2nd Church of Christ. That’s a real church—or at least it was. Its website’s News section proclaims that it shut down in the summer of 2004.

The site itself has a lot of standout peculiarities. For one, it still portends to represent an active church on every other page, with a contact page that directs to an “info” email and a leadership section “coming soon.”

What’s more, the site’s Who.is information attests that the site was last updated Feb. 13, 2013, and that it’s seen quite a bit of activity of late—activity that’s come nine years after the church’s doors closed for good.

Other clues can be found in the ridiculousness of language. It’s not altogether impossible for a Midwestern pastor to drop the N-word over and over again in a rap about a person he regularly refers to as his lord and savior, but it is rather peculiar, isn’t it? You wouldn’t exactly think that a guy so hellbent on communicating with God and his divine homies would take such a lax look at language. But hey, I’m not from Iowa.

Use of any profanities aside, there’s a perpetuated use of the slang word “swag”—a word that once referred to promotional items but now refers to style—towards the end of the track that seems out of place. Why? Because that change in the word’s meaning didn’t occur until sometime after 2010, when Tyler, the Creator and his rap group Odd Future started screaming it everywhere it went and it became “the most used word in the whole fucking universe.” No chance a pastor in central Iowa would have known how to use that word correctly in 2004. It’s impossible. It’s downright impossible.

Fake or for real, the joke’s on us viewers either way. Whoever this Brian Spinney guy is has set up an AdSense account on his video and strung us along to the tune of about $600, according to AdSense earnings discussed on Warrior Forum. If he’s lying, and he created the video in 2013 in an effort to drum up some wide-eyed reactions, he’s certainly earned them.

And if he’s not, and the video’s legitimate, well then, I just spent an hour and a half writing a story about a racist pastor who probably doesn’t care one iota about what I think about the way he hails Jesus.