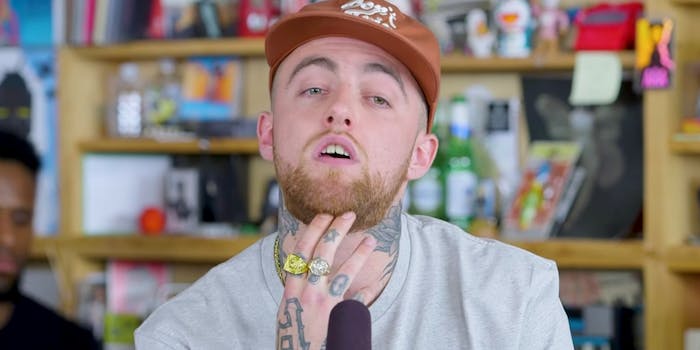 Rapper Mac Miller died Friday of “an apparent overdose,” TMZ reports. He was 26.

According to TMZ, law enforcement found Miller in his Los Angeles home after a male friend called 911. Miller was pronounced dead at the scene.

Miller, a Pittsburgh native, was charged with a DUI in May after he crashed his car into a utility pole in Los Angeles. Ariana Grande, his ex-girlfriend, wrote a statement on Twitter after the accident detailing how substance abuse affected their relationship and saying she would “continue to pray” for his recovery.

Fans and fellow celebrities, including rapper Wiz Khalifa and artist Kehlani, wrote tributes to Miller on Twitter following news of his death.

I WILL MISS YOU SO MUCH

I FUCKING LOVE YOU DUDE

Vulture published an interview with Miller just this week related to the August release of his album Swimming. He told the culture website that he found it “exhausting” as a celebrity who grew up in the public eye to confront the media and people’s perceptions.

“No one’s gonna ever really know me,” Miller told Vulture. “You know what I mean? That’s okay. The people that have the best chance of knowing me, that would like to, would just be by listening to my music.”