Which social network gets the most shoutouts in rap lyrics?

Detailing the abundance of mentions for social media sites over 23 years of rap tracks.

Rap’s long been a genre facing the forefront of communicative technologies—take Ice Cube’s pager, which’s been blowin’ up since that good day in 1993—so it stands to reason that the world’s hottest rappers hold a reverence for the onslaught of social media sites that allow you to talk to a million people while you’re lying on your couch.

Yesterday, Jason Kottke used Rap Genius‘s Rap Stats graphing feature to create what he calls “The Jay-Z Social Media Average,” detailing the abundance of mentions for Tumblr, Twitter, Facebook, Instagram, Myspace, and Snapchat in rap tracks over the past 23 years. It indicates once and for all that Twitter is the most popular medium among the many of the most popular MCs—a legit shock to Fat Joe, no doubt, who could have sworn he changed the game when he concocted the anthemic “Instagram that Hoe” in October 2012.

We’d also be remiss not to mention Snapchat’s troubles and Vine’s absence altogether, which is strange, since our coverage suggests that rappers comprise half that community. 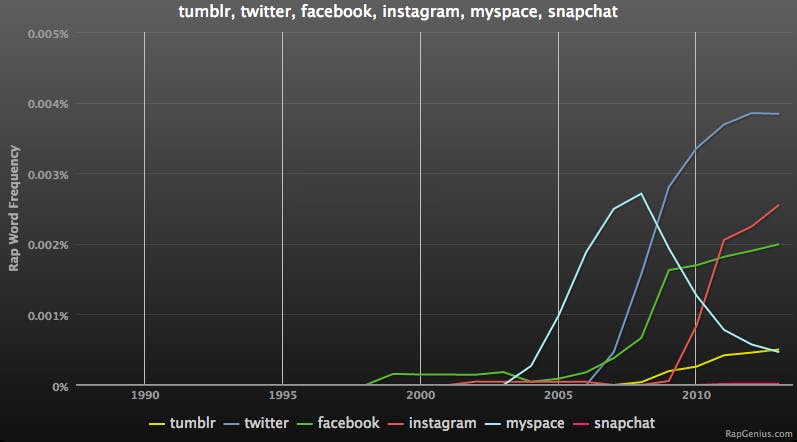