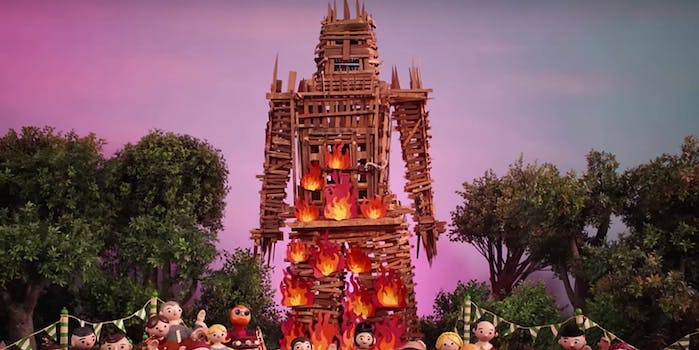 After Radiohead and frontman Thom Yorke began deleting posts on the band’s social-media accounts over the weekend, the thought bubbles start popping up: New album? Blank slate as viral marketing?

Turns out they were just clearing the way to burn the witch.

On Tuesday, Radiohead released a new video for its upcoming song “Burn the Witch,” a claymation clip that references the 1973 pagan horror film The Wicker Man, which was remade in 2006 with Nicolas Cage and gave us this wonderful meme.

The video is also reminiscent of the Trumptonshire trilogy, a late-1960s BBC children’s series.

Radiohead is preparing to go on tour, and fans got a whiff of what might be in store last week.

The single for the song, which has allegedly been floating around for more than a decade, is set to be released May 4.

Radiohead’s Twitter and Instagram accounts now only include new artwork and links to the video. Given the streaming platform war pitting established services like Spotify against newcomers like Tidal, it will be interesting to see how the celebrated band decides to release and sell its upcoming album.