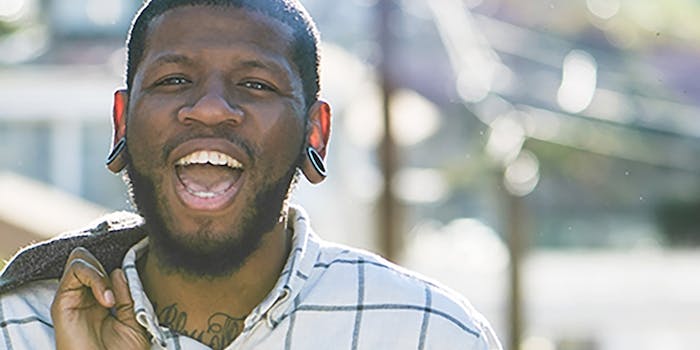 Thanks to Kickstarter and the support of the comedy community, one standup is going to live his dream of recording a one-hour special before he dies.

Los Angeles-based comedian Quincy Jones was diagnosed with stage-four mesothelioma (a rare form of cancer) in July, and given only a year to live. When his friend and fellow comic Nicole Blaine found out one of his biggest disappointments was never getting to record a one-hour special, she jumped into action.

It turns out Blaine and her husband Mickey are also an experienced production duo, and together they teamed up to start a Kickstarter project and turn Jones’ dream into a reality.

They set out with a modest $4,985 goal, taking into account things like camera, lighting, and food for the production crew, but what they didn’t expect was for the project to go viral.

His story caught the attention of the comedy community, and picked up a ton of traction on Twitter and Facebook.

Comedian Quincy Jones has terminal cancer & he wants go out blazin’ in a one-hour special. You can help. https://t.co/IH2u1TSTXE

Comedian Quincy Jones is a brave & funny dude fighting a rare cancer. Donate here so he can shoot a comedy special: https://t.co/MkyYt4VIJM

Comedian Quincy Jones wants to film a stand up special before his cancer kills him. https://t.co/py9nJG7Dwt

The duo met their goal in only two hours, and had raised more than $15,000 within the first 10 hours. The total is at over $20,000—a full $14,000 more than the production crew had been planning to work with —thanks to the help of more than 490 donations. According to a Facebook update, Blaine plans to put all the money toward making sure Jones “lives comfortably now.”

My hands have been shaking for hours and I can’t stop bursting into tears. How can I thank you all? I’m moved and speechless. Today, while my 32 year old friend, Quincy Jones, was getting chemotherapy at a county hospital in Los Angeles, hundreds of people came together at the exact same time to make his dying wish come true. He was half-conscious when it was happening. In 2 hours of launching the Kickstarter campaign our little goal was met. When Quincy opened his eyes he discovered the love and support. His dream to film a stand-up comedy special just became a reality. Because of you ALL. It’s amazing what can happen when people come together.

If you needed a little faith in humanity for your day, this is it.

Update 9:28am, March 17: Ellen DeGeneres invited Jones onto her show to talk about his comedy March 15. During the appearance, the host implored both HBO and Netflix to air his hourlong special, and donated $10,000 of her own money to his already-fulfilled Kickstarter.