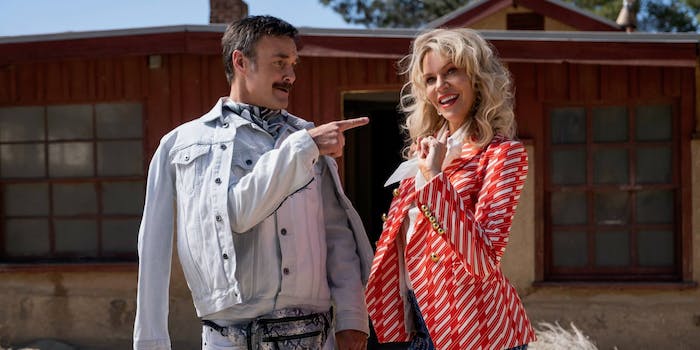 The Will Forte and Kaitlin Olson-led story isn't worth the investment.

The home renovation game is massive to the point where the hosts of several home renovation shows are starting to become household names in their own right. The concept of renovating and house-flipping even has a big enough draw that Quibi greenlit two separate house-flipping shows to help launch its mobile-friendly streaming service: a scripted comedy and an unscripted renovation show with a pretty outrageous concept.

RELEASE DATE: April 6, 2020
DIRECTOR: Ryan Case
STREAMING: Quibi
A married couple trying to jumpstart a career in home renovation get on the bad side of the Mexican drug cartel, who want them to renovate one of their homes.

At first sight, Flipped is the more promising of the two series. It’s a Quibi and Funny or Die team-up that stars Will Forte (SNL, The Last Man on Earth) and Kaitlin Olson (It’s Always Sunny in Philadelphia) as Jann and Cricket, a married couple who try to become the stars of their own home renovation show. Eva Longoria has a supporting role and is a producer on the series, and there is a lot of room to play around with poking fun at the entire trend of home renovation television. But while it does plenty of that, the show’s floor concept doesn’t really hold up, showcasing the limits of Quibi’s own formatting and how it can hinder your story.

With a little bit of editing to make it flow more smoothly, the first three “chapters” of Flipped (as Quibi calls these segments) made available to critics could work as a strong pilot. The chapters have a bit of everything and a solid hook. But when you split into smaller, bite-sized segments, Flipped suffers. Tthe story lags, many of the jokes fall flat, and the cracks show more.

Jann and Cricket are both creatives who bristle at those who wish to “stifle” their creativity, and both Forte and Olson breathe life into a story with a lot of potential. Jann’s plans for a show about the Triangle Shirtwaist Factory fire are squashed by higher-ups while Cricket gets reprimanded (not for the first time) at her hardware store job for trying to push an entire kitchen renovation on a customer who only wanted one item. They scoff at the garish taste of one house-flipping show’s hosts while proving that they’re much in a similar vein. The commentary never goes beyond the surface, so while it lands, it doesn’t really stick.

They know very little about what actually renovating houses takes when they buy a real fixer-upper in the middle of the desert, refuse to listen to anyone who might know anything that doesn’t align with their vision, and they’re starting to get in over their heads even before the Mexican cartel shows up.

Flipped is easily the kind of show that could improve the more we see of it, but it could just as easily go the other way. But right now, Flipped is not worth the investment.