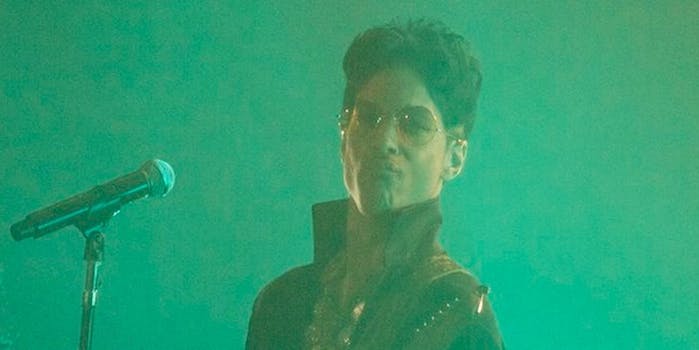 There have been hints of Prince on Twitter, via the number-and-letter friendly PrinceTweets2U account, which may or may not be run by comedian Jake Fogelnest.

But yesterday, there seemed to be more Prince-related activity on Twitter than usual. It looked like PRINCE 3RDEYEGIRL had been verified. A Twitter Music rep confirmed it was him. The deluge commenced.

Prince isn’t known for being especially social-media savvy. (He once called the Internet a fad.) But he’s quickly figuring out this whole Twitter game.

His avatar for 3RDEYEGIRL, which looks to be a new musical project he’s working on, shows him wearing a sleeping mask, holding a finger to his lips, surrounded by three beautiful girls. So, he seems to be in his natural habitat, on an astral plane over Funkytown.

There were other highlights: He posted the requisite food photo.

He shouted out 2 tha ladies, or perhaps the ladies in his new band, 3RDEYEGIRL:

A GIRL WITH A GUITAR IS 12 TIMES BETTER THAN ANOTHER CRAZY BAND OF BOYS https://t.co/Jq99Tj3B8G

So far, Prince has more than 45,000 followers. Naturally, he follows no one.