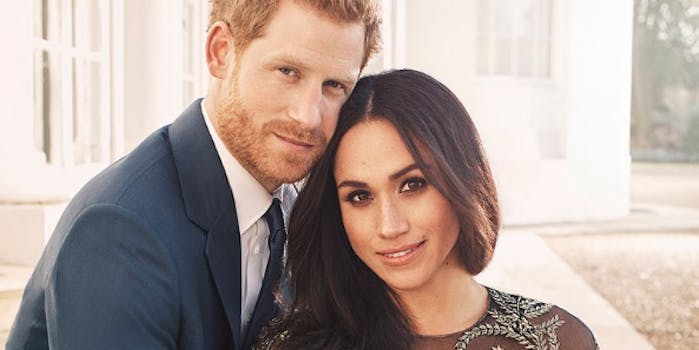 If your Facebook feed has burned you out on melodramatic engagement photos, fear not: They only have two.

If your Facebook feed has burned you out on melodramatic engagement photos forever, fear not: Prince Harry and Meghan Markle only have two.

The newly-engaged royal couple are home for the holidays and attending events like “Queen Elizabeth II’s annual Christmas lunch at Buckingham Palace,” but they reportedly made time for a quick engagement shoot at Frogmore House in Windsor, England, earlier this week. Fashion photographer Alexi Lubomirski was responsible for the photos. According to Hello! magazine, Lubomirski—a descendant of Polish royalty himself—is no stranger to a glamorous celebrity shoot. He has worked with Vogue, GQ, and Harper’s Bazaar to shoot covers with stars like Beyoncé, Charlize Theron, Gwyneth Paltrow, Natalie Portman, Jennifer Lopez, Jennifer Aniston, and Julia Roberts over the years. He also apprenticed under legendary fashion photographer Mario Testino, who took Prince William and Kate Middleton’s engagement photos back in 2010.

The pics give you two looks at the couple: one more formal portrait, with them sitting on a staircase outside the home, and then a second black-and-white close-up, which British tabloids are calling “more relaxed.”

Prince William and Kate Middleton also released two engagement photos, so this might be the new royal social media standard.