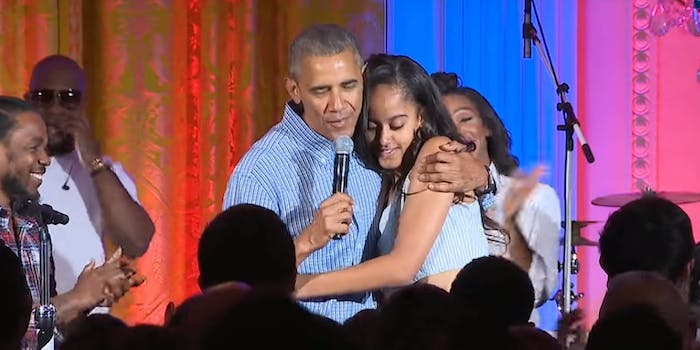 While Kendrick Lamar and Janelle Monáe look on during July 4 celebration.

President Obama‘s Fourth of July celebration was one of the coolest the White House will see for years, featuring guest performances from Kendrick Lamar and Janelle Monáe.

It also gave the president ample opportunity to exercise one of his lesser-known talents: being an embarrassing dad.

Following a speech to his guests, Obama pointed out, “It just so happens that we celebrate our country’s birthday on the same day that we celebrate my oldest daughter’s birthday.” And then he began to sing happy birthday to Malia, who turned 18, pulling her up onstage for a hug.

Once the Obamas leave the White House, we’re definitely going to miss those beautiful moments where the president embarrasses his kids with his dorky behavior.